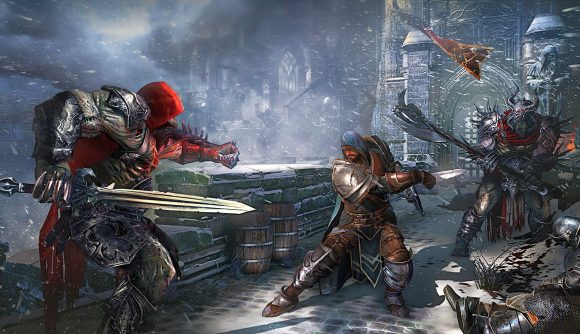 CI Games has been talking about its ambitions for Lords of the Fallen 2 following a shiny new logo reveal. In a blog post on its website, the studio explains that the scope for the upcoming PC game has “grown immensely” in the past few years.

CI Games goes on to say that Hexworks is creating something that has a “strong chance” to make the series “more popular among Soulsborne/Souls-like communities and beyond”. The games publisher also hopes the upcoming release will help establish the Lords of the Fallen IP as a “long-running franchise for CI” alongside tactical shooter Sniper Ghost Warrior.

“Lords of the Fallen 2 is our largest project in terms of the whole of CI Games,” says CI Games CEO Marek Tymiński. “The previous game was a full-priced, full-featured release and we’re approaching the next one with an even larger scope. The sequel will move the franchise to dark fantasy and will offer a revised and challenging combat system.”

The Lords of the Fallen series has seen a few studios try their hand at development duties. The original game was developed by Deck 13, but Defiant Studios took the reins on the sequel until it was cut loose and Lords of the Fallen 2 was delayed. Eventually, Hexworks, a new studio opened by CI Games, was revealed to be handling development duties.

There’s no release date just yet, but here are the best games like Dark Souls to keep you busy while you wait.