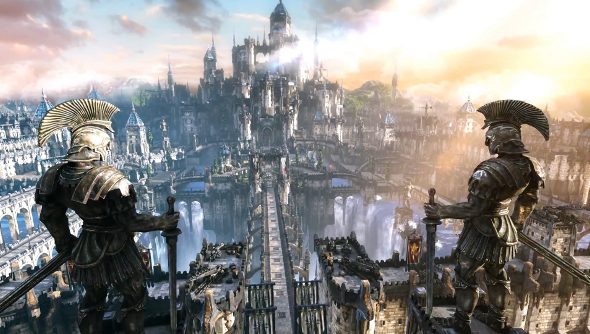 Lost Ark, Smile Gate’s online hack ‘n’ slash RPG, looked impressive when it debuted earlier this week, but a new, 20 minute extended trailer coming out of G-Star reveals just how massive and ambitious the Korean ARPG is. Adventurers can explore the ocean in ships or compete in drinking contests and PvP, all while fighting the Demon Legion of Kazaroth, whatever that is.

The first part of the trailer spills the beans on just a few of Lost Ark’s intriguing classes.

There’s the Battle Master, a fast warrior with devastating air combos; the Devil Hunter, an agile gunslinger who can switch between dual pistols, shotguns and rifles; the Arcana, a mage who uses cards to cast spells, selected from a roulette wheel; the tanky, mechanical lance-wielding Warlord; the Infighter, a martial artist with a penchant for explosive magic; another caster, the Summoner, who commands animals and spirits while firing off devastating arcane attacks; and finally the Berserker, a bloke with a gargantuan sword who can carve up armies in a frenzy.

Surface deep, the classes are familiar, but each seems to have a hook that sets it apart from not just the other classes, but other ARPGs.

Lost Ark also boasts a novel ability customisation system, the Tripod system. Players can select an ability or spell, choose its affinity – which seems to be what type of damage it does, like fire, earth and so on – first, then its attack type, like if it’s an area of effect attack, and finally it can be upgraded, making it do damage to more enemies or have increased range.

While adventuring, it seems like players will face challenges and make decisions that seem out of place in a Diablo-like, which is by no means a bad thing. The trailer shows a player deciding whether to help an NPC who is dangling off a ledge, or simply kick him off. Then a chase is shown off, where a player runs and jumps across rooftops in an effort to catch a thief. 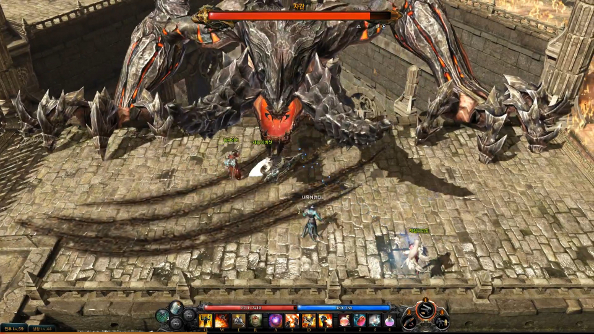 Players can team up to take on massive bosses wandering around the world, or go on dungeon romps where they can face truly gigantic monsters that require a special touch, like keeping them pinned down with chains fired from massive ballistas.

There’s more than fighting to do, however. There appears to be a focus on exploration, with characters able to climb cliffs, leap over huge gaps, and search for hidden secrets. Characters also have a two levels – one for battles and one for “life”, which applies to gathering skills such as archaeology, logging and mining. This combined with all the players running around gives it more than a hint of MMO.

Unlike most MMOs, though, where gathering supplies is competitive – with players racing to nodes – or set up so that each player gets their own node, Lost Ark’s gathering seems to encourage teamwork. Players can work together to chop down a massive tree, for instance.

Other diversions include a drinking game, where heroes guzzle down beer from barrels, and PvP scraps in the colosseum.

The game doesn’t just take place on dry land, either. You can bugger off on a ship to go fishing, find salvage or just explore. The ocean isn’t a peaceful place, though, and in the trailer we see a captain getting into a fight with a ghost ship by boarding it and carving up all the undead nasties.

It looks mighty impressive, but there’s no word on if it’s coming West. Cross all your digits.