Magicka: Wizard Wars, which we’re pretty fond of here at PCGN HQ, has hit open beta today. Previously only available to Founders and the Steam Early Access lot, it’s now opened up to absolutely everybody and their mums.

The opening of the floodgates also heralds a bunch of new content, including new, all-important wizard robes and assorted magical paraphanalia, a new magick, and a brand spanking new map set in a gloomy dwarven cavern.

I took the new content for a spin last week and ended up watching my wizardly gibs flying all over the stalwart walls of Galdrhöll Halls.

The new Wizard Warfare map, the aforementioned Galdrhöll Halls, is another capture and kill affair. Four respawn points are dotted around the large cavern and can be captured to ensure that your team can respawn, while denying the enemy team from doing the same.

As the deaths add up, respawns get more and more limited, until there are no respawn tokens left and the match becomes a fight to the death. Intense stuff.

Though the goal of Wizard Warfare is the same as the standard map, things play out a little differently thanks to the layout. The respawn points are laid out in a rhombus, making the jog from any point back into the fray shorter.

It’s a lot more common to see entire teams duking it out in one area, resulting in some savage spell-flinging and heaps of gibs and viscera. The importance of capturing respawn points remains the same, but it’s simply quicker to get to them and more likely that you’ll become embroiled in a violent lightshow where everyone ends up on fire or being chased by the Grim Reaper. 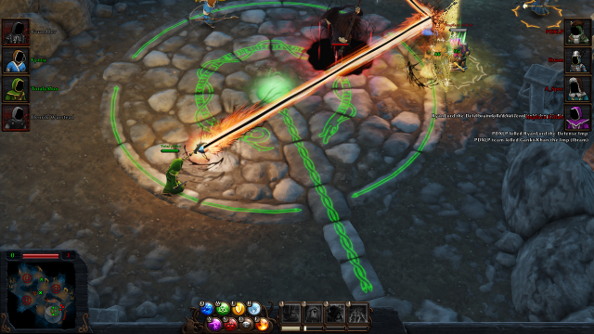 It’s somewhere between the standard map and the duel mode, where two combatants kick the crap out of each other in a small arena.

It’s rather pretty too. The dark and gloomy dwarven stronghold gets lit up by the flashy spell effects, making it look more like a warehouse rave than a bloody fight in a cave. The spells have always looked striking in Wizard Wars, but Galdrhöll Halls really lets them show off their best side.

On top of the new map is a slew of magical items from robes to swords. Wandering around the battlefield dressed up like a steampunk engineer was, I confess, a delight. The Steam Engineer robes is a friendly dig at Steam itself, and it’s also rather handy. Despite the low hit points the armour provides, it makes the wearer rather fleet of foot, and when combined with the wrench and blowtorch staff, it can be a deadly loadout, improving fire damage and offering – when you’re in a pickle – some significant melee damage. 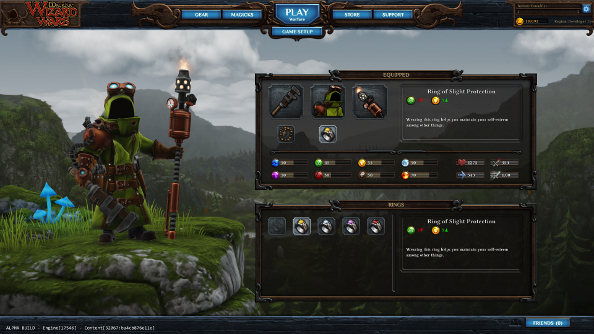 And because you really can’t have a magical war without a dash of necromancy, Paradox North has chucked in a new magick: Raise Dead. Not surprisingly, this spell allows its user to raise the dead from their graves. Specifically, imps. These zombie imps are ravenous, hungry beasties and have one goal: devour the flesh of wizards. Lovely bunch of guys.

You can download it on Steam and check out Wizard Wars, along with the new content, right bloody now.