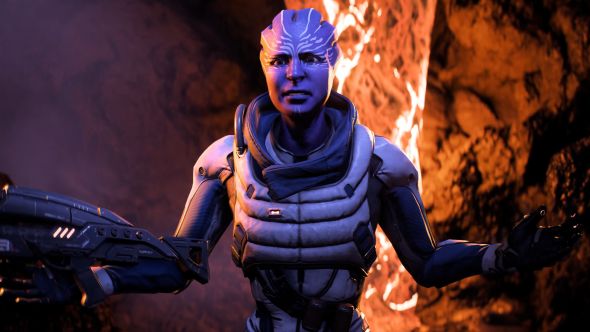 Reviews for Mass Effect: Andromeda have dropped, with technical concerns a common thread. Some of these were addressed in a day one patch, but Bioware aren’t resting on their laurels – another update has just been pushed to PC.

Lead designer Ian Frazier confirmed the news on Twitter in response to a fan who’d noted a new download in Origin. Annoyingly, there don’t seem to be any official patch notes, but producer Fernando Melo mentioned a few specifics – the patch focuses on fixing issues with positional sound and the melee key in multiplayer, and an issue where software from peripheral makers Corsair would cause a black screen.

Though the game isn’t out yet, subscribers to Origin Access have been enjoying a pre-release trial.This thread on Reddithas been piecing together the new patch’s improvements based on changes to that trial.

Frazier promises more patches to come, so here’s hoping that the technical issues reviewers have identified are only temporary.

Speaking of, you can find out what we thought of Bioware’s latest effort here.

Here’s Frazier delivering the news from the live support team:

Hey folks, the live support team just confirmed for me: the day 1 patch IS included in the early access build on both Xbox and PC. pic.twitter.com/1OnlHV1osX

Though reviews for Bioware’s space opera have not yet been published, several early previews – including our own – raised issues with character animations and other technical points. Since we first got to try the game back in February, Bioware say they have fixed over 5,000 bugs, with more presumably having been squashed in the day one patch.

Now that the patch is live, any further fixes will be made post-launch, as Frazier also confirms. So when you read a review, or if you’re playing the trial right now, technical observations will reflect the state of the game when it launches. That’s on Thursday if you’re in the UK, or Tuesday if you’re in the States – check our release post for exact times.

In the conversation beneath his tweet, Frazier suggests further bug fixes, and “possibly” improvements to character creation, will be applied after launch. He also links to a troubleshooting page if you’re having issues.

Are you playing the trial? Are you enjoying it, or do you want to see more changes before you’ll commit your money? Let us know in the comments.