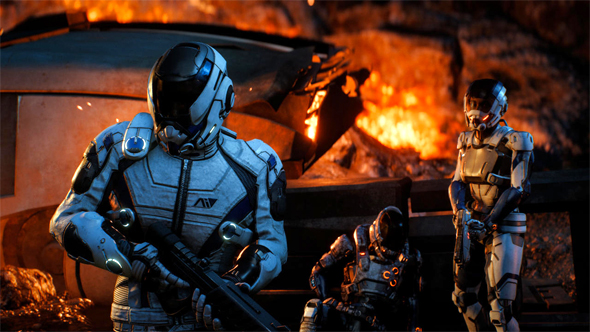 Last week’s Mass Effect: Andromeda patch addressed some of the most common complaints about the game, such as those those beautiful but tiresome planetary transitions, inventory limits, and weird facial animations. On the sly, it also updated the game’s Denuvo anti-piracy protection.

Andromeda’s Denuvo software was cracked in just 10 days – a record for any Denuvo-protected game that is also on EA’s Origin service. It turns out there’s a reason it was cracked so quickly; as reported by DSO Gaming, Andromeda launched with an outdated version of Denuvo.

Resident Evil 7 had its Denuvo cracked in under seven days back in February – setting the current record for the software’s shortest-lived protection. If Andromeda was using the same version, that would explain why it was cracked so quickly.

Since last week’s update, however, Andromeda now carries the latest version of Denuvo. It means that anyone with a pirated copy won’t be able to update it – so they’re stuck with tedious planet swooping and weird mannequin faces.

Mass Effect: Andromeda’s version 1.05 patch has now been applied, and players have already noted a big improvement in certain animations.

The example that many have highlighted is the infamous “my face is tired” conversation with the prickly Director Addison.

Here’s a Youtube video of director Addison before the patch, and after. We made a side-by-side comparison at YouTube multiplier, which makes the improvements even clearer: the new version not only has better shading, so she doesn’t look like a mannequin that’s taken a shotgun of makeup to the face, but a range of new animations and gestures. Though they still haven’t fixed the part in the script when she says “less” when she means ‘fewer’, which sticks in the craw a bit when she corrects Ryder’s grammar earlier in the conversation.

Anyway, this conversation is only one prominent example. Cycu1 has a comparison video showing changes to facial animations in the opening few minutes of the game – hopefully we’ll see these improvements right across the board, rather than just on the most memed conversations.

To see what else has changed, check out the patch notes in our original story, below. Personally I’m looking forward to getting back into the game without those lengthy (if beautiful) flying sequences between planets – here’s JV2017gameplaydemonstrating that.

Original story April 4, 2017:BioWare are releasing a new patch for Mass Effect: Andromeda this Thursday, and it promises to address a range of complaints levelled at the sci-fi RPG. Characters’ dead eyes should be given some life, lip-sync will be improved, and you can finally skip the bloody cutscenes that play when you travel between planets on the Tempest.

That’s not all, though. The patch will also improve matchmaking and latency in multiplayer, it’ll make decryption keys more readily available – so you can skip that awful space Sudoku – and it’ll stop Ryder running like he’s lost his donkey when players zig-zag at speed.

BioWare promise more support to come over the next few months. Among upcoming tweaks will be more options and variety in character creation, graphical updates for characters, more gay romance options for male Ryder, better animations and cinematics, more cosmetic items, and even improvements to conversations with Hainly Abrams, a transgender character who has been widely criticised for how she’s presented.

The same kind of support is promised for multiplayer, in which new maps, characters, and weapons will be added. BioWare will also build on APEX missions, with Thursday marking the start of the first of three new chapters.