The ambition of the first Mass Effect game cannot be overstated. A young BioWare was taking risks and moving away from the isometric RPG games that had initially propelled the Canadian studio to success. It was an original IP, built using the newly released Unreal Engine 3, that put a starship at the player’s fingertips and told them to explore an entire galaxy.

The writing team was clearly passionate about sci-fi, taking inspiration from Alien, Blade Runner, and Star Trek. The result was an impressive melting pot of ideas. Drew Karpyshyn, Mass Effect’s lead writer, nailed the game’s sense of adventure and political intrigue. Fellow wordsmith Chris L’Etoile injected credible sci-fi lore into the Codex and planetary descriptions. And project lead Casey Hudson came up with the foundational concepts that would shape the course of the entire trilogy, including Commander Shepard’s insectoid foe – the Reapers.

BioWare’s creative efforts paid dividends. Mass Effect’s release was met with critical acclaim, leaving behind a legacy as bright as the stars it had so vividly imagined.

Given Mass Effect’s role in shaping the industry, and the fact that a new Mass Effect something is coming, now is the perfect time to take stock of the series and see what BioWare can learn from each entry. Spoiler warning: this piece contains plot spoilers for each of the games listed. 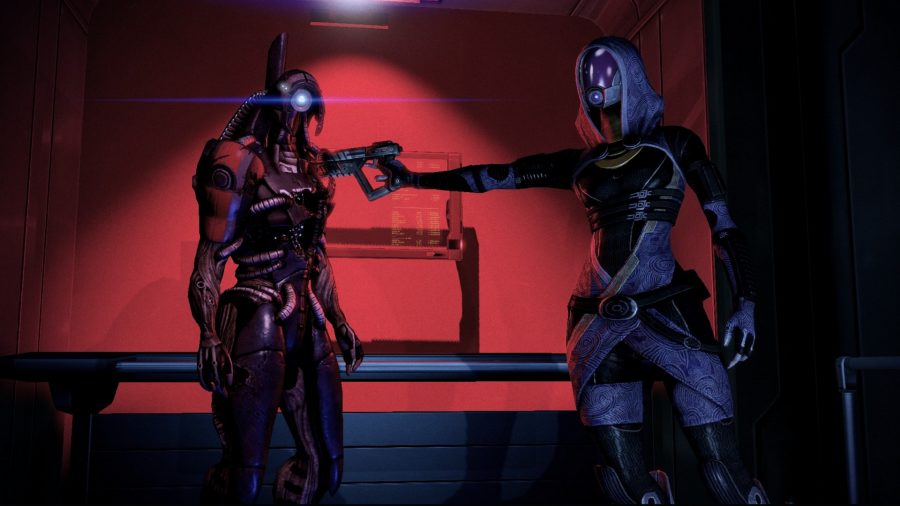 BioWare’s Milky Way is home to a diverse community of alien races, each with a unique culture, tech, and system of government. Sprawling space stations serve as hubs of intergalactic politics and commerce; old grievances lead to interspecies tensions; subversive corporations experiment on workers using ancient alien tech; and fire fights break out around the crumbling spires of forgotten civilisations.

Discovery is what makes the original Mass Effect so special. Around almost every corner there’s an opportunity to get lost in a world that is so utterly alien as to be disorientating. The series’ primary antagonist is billed as the big mystery, but the entire game is layered with mysteries that are waiting to be unravelled. 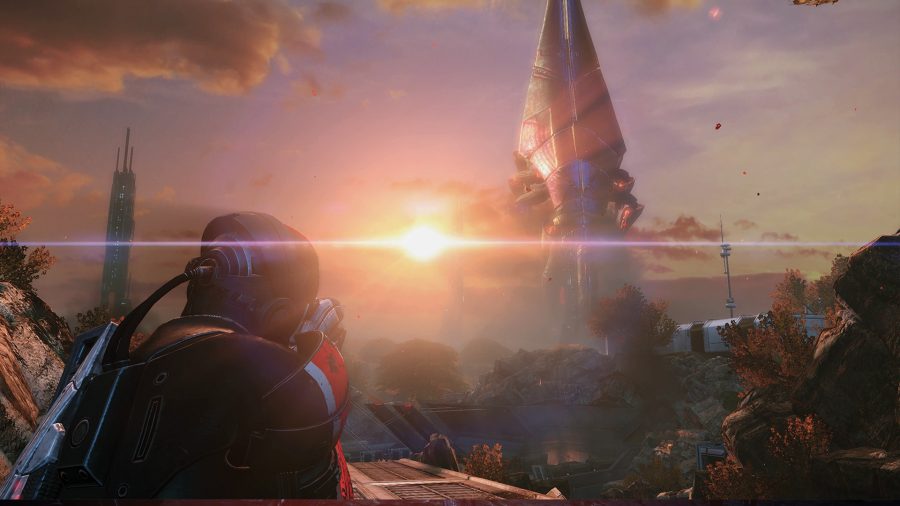 Mass Effect throws the player into the deep end, presenting them with over a dozen sapient lifeforms, myriad alien home worlds, and a Codex that puts War and Peace to shame. Simply trying to remember the names of each alien race can be tricky for first-time players. The lore is as dense as it is complex, helping to maintain the feeling that you are occupying an authentic space.

Discovery is what makes the original Mass Effect so special

Mass Effect’s story is baked into its gameplay, with long sections of action deliberately punctuated with exposition and exploration, which in turn improves the overall pacing. Take the corporate-owned research facilities on Noveria. After assessing the situation planet-side, the player learns of a series of shady experiments taking place in the labs of Peak 15. The objective is to reach the labs and find an Asari Matriarch, but to do so, you need to prepare for the journey and work out what you’re facing. After navigating Port Hanshan’s corporate underbelly to prepare, you finally get the payoff: the action. Shepard fights through the Geth-occupied slopes of Aleutsk Valley, before reaching the Rachni-infested labs. In between battles, you learn about the Rachni, their storied past, and how they fit into the overarching plot.

Mass Effect’s levels are designed around the story first and foremost – not as mere shooting galleries, but as living spaces with as much capacity for storytelling as an awkward elevator conversation back on the Normandy. Mass Effect 5 needs to rediscover that pacing and commitment to consistent storytelling. 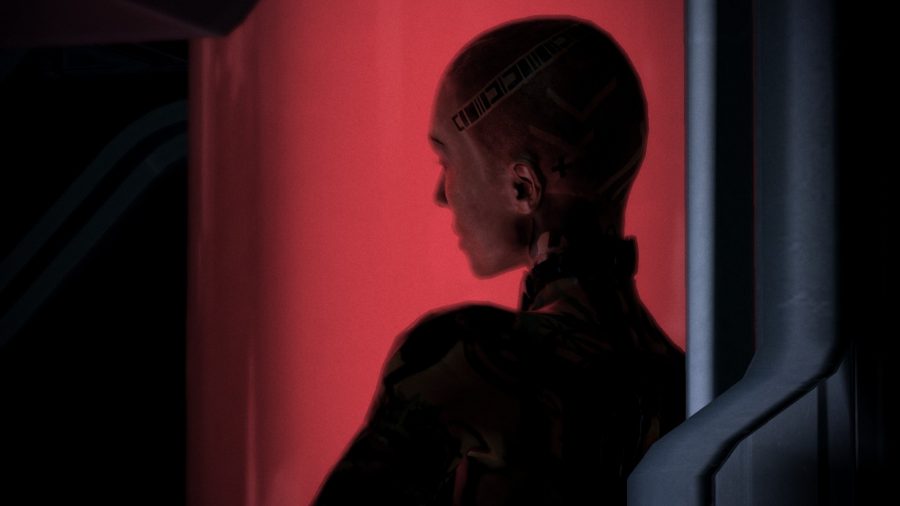 This forensic attention to detail also applies to much of Mass Effect 2, but the focus is primarily on companions and forming relationships with your ragtag crew.

Weaving through partially constructed skyscrapers in pursuit of a Drell assassin is just one of the game’s many highlights, and it’s all in service of recruiting another squad member. In between felling hoards of Eclipse mercenaries against the backdrop of Nos Astra’s neon-lit metropolis, you gain important intel about your target from frightened construction workers. It all culminates in the assassin, Thane Krios, dropping in on his target undetected, efficiently dispatching the nearby guards, and finally executing his target in full view of Shepherd. It’s quite the introduction, considering Thane is just one of several companions you meet in the story.

Mass Effect 2’s main campaign is complemented by some of the best side quests in videogame history, but it’s the diverse cast of companions that drive both forward rather than sci-fi plot. Not much happens in Mass Effect 2 without the direct involvement of a companion – they’re all essential to your journey at one point or another. 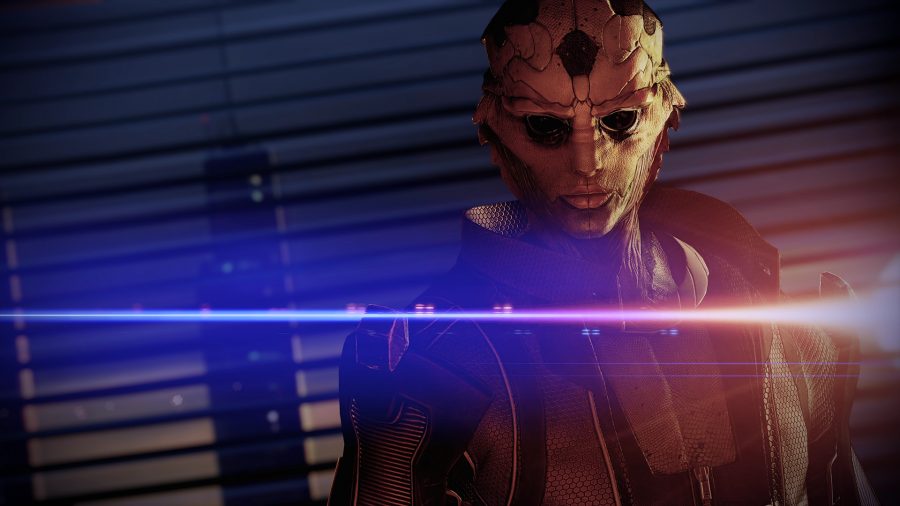 Loyalty missions expand upon Mass Effect’s excellent foundations, reminding us that the Milky Way is a vast and unknowable place. Through our fellow squadmates we learn about Asari Justicars, the relationship between the Drell and Hanar, the STG’s involvement in deploying the genophage, the factious nature of the Geth, and much more.

As we forge new alliances, further mysteries emerge: the shocking origins of the Collectors, a derelict Reaper caught in the gravity well of a failed star, and the uncharted space beyond the Omega-4 relay. Unlike the first game, Mass Effect 2 features loyalty missions for every companion, so you get ample opportunity to click with one of your crewmates.

Mass Effect 2 delivers its gripping story through Shepherd’s allies, and Mass Effect 5 can learn a tremendous amount from how ME2 develops these characters and positions them as the driving force behind its narrative. 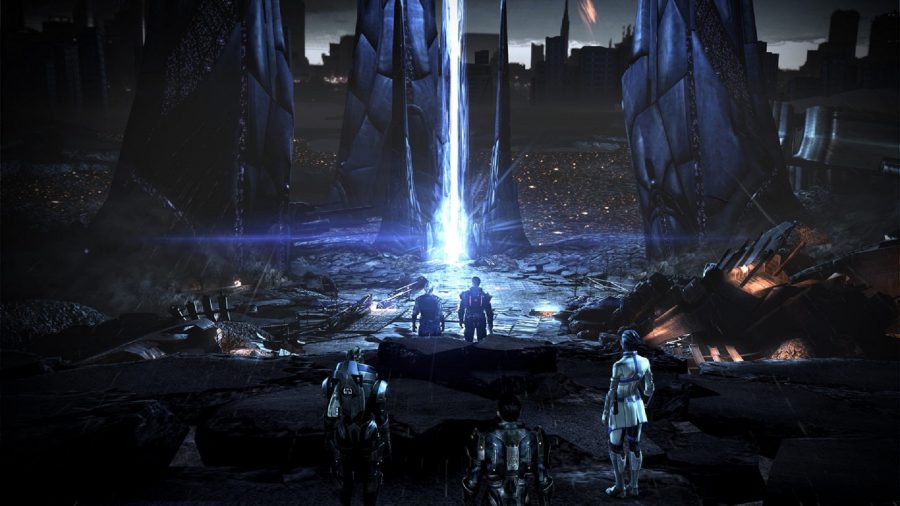 In its final instalment of the trilogy, BioWare commits a cardinal sin by introducing new plot devices to resolve its central conflict. The Catalyst, an artificial intelligence bolted onto the Citadel, only appears in the closing minutes of the game, suddenly replacing the Reapers as the big bad.

In trying to wrap the trilogy up, ME3 throws the baby out with the bath water

Mass Effect 3 is supposed to neatly tie all the loose threads from the previous two space games together. Several mysteries are in dire need of explanation: Saren’s interest in the Thorian, the Rachni’s indoctrination, the Collector-born plague on Omega, the dark energy readings around Haestrom, the human-reaper hybrid, and so on. Mass Effect 3 abandons these core ideas and focuses almost squarely on the notion of a technological singularity wiping out all organic life – an ending that wasn’t foreshadowed convincingly and had more holes than Swiss cheese. 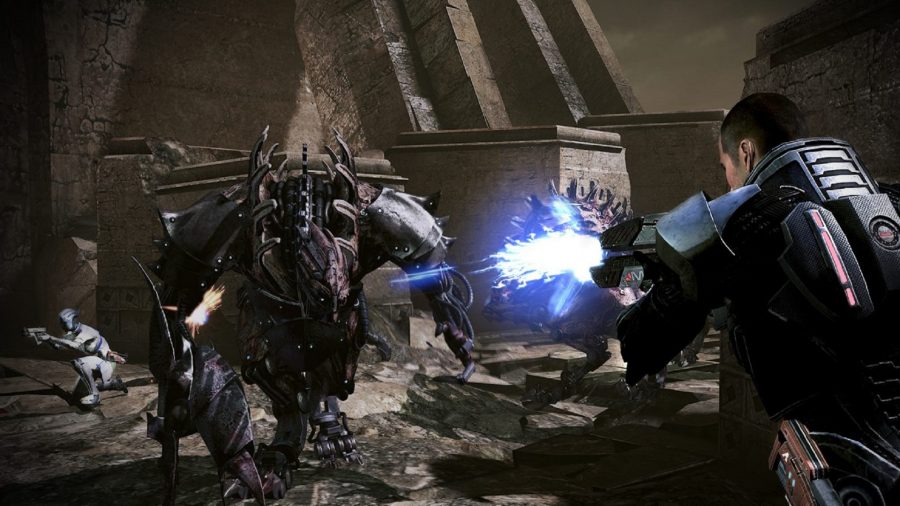 Mass Effect 3 does have some moments of brilliance. Its combat, while less varied, feels punchier. Missions boast some radically different outcomes depending on the player’s choices – no doubt a consequence of not needing to worry about a direct sequel. Oh, and cutscenes and animations look superb, which you would expect from a sequel, but we’re getting there.

In trying to wrap the trilogy up, ME3 throws the baby out with the bath water. There are no new alien races or hub worlds to explore. Missions mostly devolve into run and gun slogs, replete with endless waves of Cerberus troops and alien husks. The Normandy feels stale without any fresh crew members, except for Javik who is only available through the From Ashes DLC. Worst of all, the side quests mostly consist of retrieving items from planetary scans and dumping them on the Citadel – a far cry from ME2’s incredible loyalty missions. There’s a lot to be learnt both from ME3’s failure to provide a satisfying conclusion, and its prioritisation of the main story above all else. 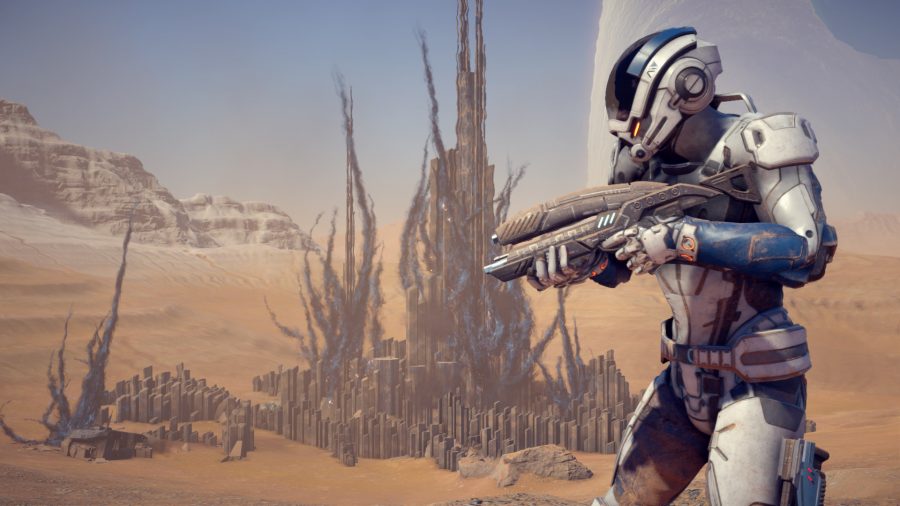 Andromeda attempts to recreate the magic of the original Mass Effect, catapulting players into a brand-new galaxy and serving up large open worlds to explore. It’s a fresh start for the series, one that lets BioWare ignore the far-reaching implications of Mass Effect 3’s ending.

However, what players get is a slightly different version of the original game’s hubs, races, and plot. The Nexus is the new Citadel, the pathfinder the new Spectre, the Tempest the new Normandy, the Kett the new Collectors, the Jardaan the new Protheans, and so on. In terms of its plot, Andromeda plays out like Mass Effect beat for beat, right down to the ending.

Andromeda is a less complete version of what came before it

Andromeda doesn’t add a whole lot of new experiences. Witnessing the hardened carapace of a Turian warrior, the grandeur of the Citadel’s Presidium walkways, or the blue corridor of a mass relay was jaw-dropping back in 2007. Presenting these moments in a different engine, just ten years on, doesn’t capture the same wonderment. While Mass Effect 2 takes the blueprint of the first game and expands it, Andromeda simply rehashes what players have already experienced. 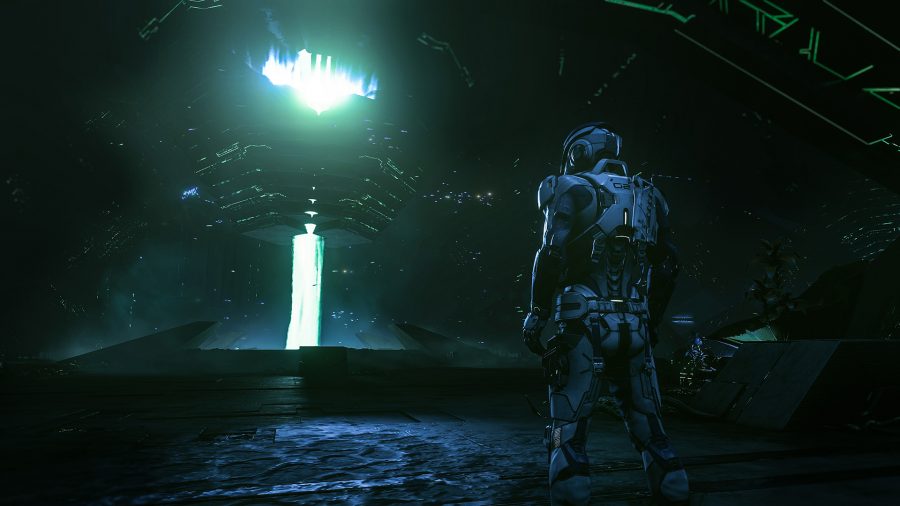 Andromeda also fails to tackle any weighty ethical or socio-political issues, opting instead to focus on simple matters stemming from the titular initiative’s colonisation efforts. Most of the campaign missions unravel in much the same way: land on a planet, shoot at the Kett or Revenant for a bit, and activate a Vault. Andromeda improves the Mako’s handling, making planetary exploration pretty enjoyable, but you only really notice this because of how many fetch quests you’re sent on.

In many respects, Andromeda is a less complete version of what came before it. The Milky Way, for example, is home to the Hanar, Elcor, Vorcha, Quarians, Volus, Drell, and Batarians – all of which are absent from Andromeda. We get the Angara and Kett in their place, but it’s not enough. You can argue this was done for story reasons, but all that matters is how empty Andromeda feels in comparison to the original Mass Effect.

The game’s many technical flaws make matters worse, but we don’t need to dredge all that up again. Andromeda’s cavalier, sci-fi lite approach feels like an attempt to start again, but it doesn’t come with the sense of discovery and intrigue that such an endeavour would naturally entail. If BioWare ever chances upon the nebulous shores of Andromeda again, it must remember the key ingredient of a Mass Effect game: discovery.