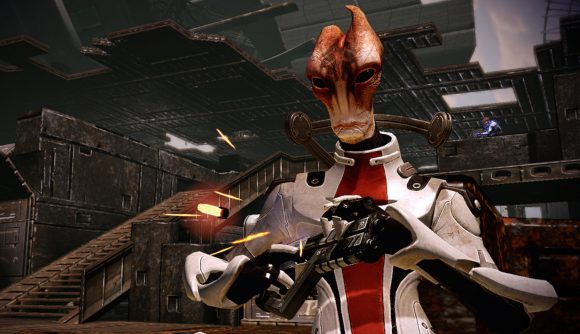 A Mass Effect trilogy remaster is coming. No, EA has not yet announced it, but reliable industry insiders have continued to report on it, and the publisher continues to tease a major upcoming remaster. In today’s financial results report, the company even puts a soft window on the ‘mysterious’ remaster’s announcement.

EA says that “over the coming months we expect to announce the launch dates of additional fiscal year 2021 title releases, including an EA Originals title and a remastered title.” EA’s fiscal year on March 31, 2021, so that would put the remastered title out sometime in the next five months.

Early reports suggested that the Mass Effect remaster would likely launch by the end of calendar 2020, though apparently the developers delayed past their initial targets and pushed the game to 2021 in an effort to provide more substantial improvements to Mass Effect 1. EA has said that their big remaster would be launching in fiscal 2021 all along, and it looks like it’s still on target to hit in March.

This weekend, we’ll reach November 7 – or N7 Day, as Mass Effect fans like to call it. BioWare is planning more than usual for fan celebration, including a panel featuring much of the original Mass Effect voice cast, and fans are hopeful that this will serve as the setting for a proper announcement of the remastered trilogy.

EA’s promise of the announcement in “the coming months” leaves a lot of room for that reveal to come much later than this weekend, but we shall see soon. In the meantime, we’ve got a big list of (announced) upcoming PC games for you to peruse.