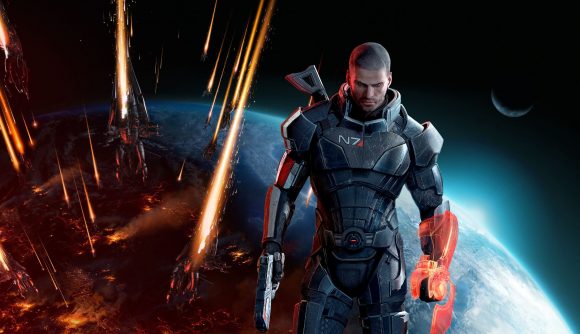 The long-rumoured remaster of the Mass Effect trilogy is set to arrive before the end of this year, though it might be delayed. A journalist with insider knowledge believes an upgraded version of the RPG games is still due for October, but might slip.

Speaking on the GamesBeat Decides podcast (ta, VGC), reporter Jeff Grubb delivered some good news, and some possible bad news, on the imminent next-gen ports. “Up until, like, this last week, I know the plan for sure was to announce it in early October, release in later in October. So good news,” He says. “Maybe bad news, it’s 2020, maybe that could start to slip, it sounds like maybe that’s a possibility, nothing for sure yet.”

EA already has space game Star Wars Squadrons as a major October release at $40, and the plan, as far as Grubb has heard, is for the Mass Effect trilogy to be a combined $60 title alongside that for the holiday season. Unfortunately, nothing is static for too long at the minute, and the publisher might err on a delay of BioWare’s action-adventure games. “With everything else falling apart, like across the board, I could see them also wanting to just delay,” Grubb explains. “But that’s not for sure, that’s not a guarantee yet. It just seems like it’s a possibility that’s on the table but last I heard, October for both.”

Grubb goes on to temper expectations for what this version of the trilogy will look like. It’ll likely be an upgrade, rather than a top-to-bottom overhaul. “I would probably lean towards upgrade. I think when I asked around about this, that was kind of the vibe I was getting, and I think that’s what people should expect for sure.”

Grubb has been on this trail for a while now, reporting back in May that an unnamed “EA HD title” for this fiscal year – which runs to March 31 2021 – is the fabled Mass Effect re-release.

Mass Effect 3 joined its prequels on Steam this summer, as part of EA’s return to Valve’s storefront. We have the best hacking games, best FPS games, and best cyberpunk games to dig into while we continue to wait for more updates.