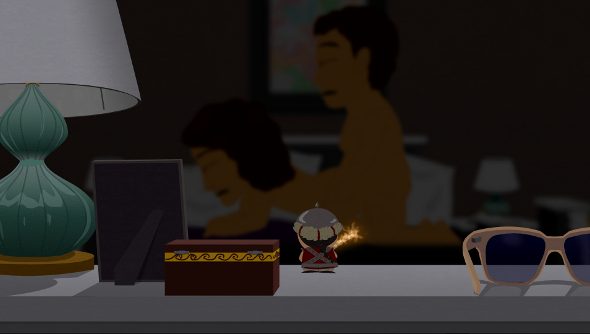 South Park: The Stick of Truth’s censorship in various parts of the world hasn’t really bothered series co-creator Matt Stone, he says in an interview with the Guardian.

The pretty lewd game – which I liked a lot in my South Park: The Stick of Truth review – saw a couple of scenes cut in Australia, the Middle East, Africa and Europe, though the PC version was uncensored in the UK, and there was no censorship in the US. “It’s not that big a deal,” Stone says.

While the show caused outrage in the US when it first aired, leading to cats and dogs living together, things have become a lot more relaxed. “It’s crazily more permissive than when we started. The standards were much, much higher when we started out,” explains Stone. “It’s hilarious, people would probably show it to younger kids now. I think things have loosened up and, generally, I think that’s pretty good. It’s a lot of the reason why television has become so dominant right now.”

But outside of the US, the game still managed to get slapped with a censor’s stamp. “I was told that Australia has different standards. They have their own ratings system, as does Europe, so I was told that we had to submit it for ratings and they come back and tell you this will pass, this won’t. Ultimately, the full version of the game is in North America, so at least that version is out there, but anywhere it’s censored [in the other version], we just put in little black cards explaining what has happened.”

I did get the feeling that Stone and his collaborator, Trey Parker, were playing a game of chicken with the censors. Even for a game based on a show that has a child murder and cooks the parents of a bully before feeding them to him, The Stick of Truth pushed the limits of taste. But the result was an absolutely hilarious game that managed to constantly escalate.