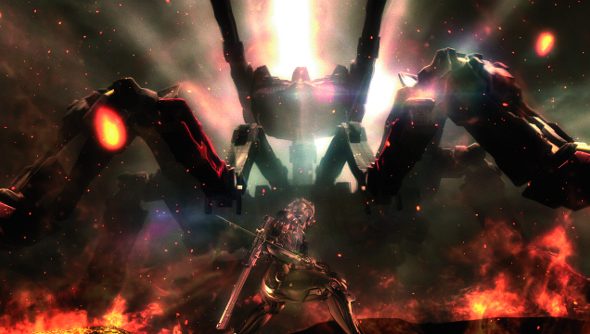 Last week, staff at Kojima Productions revealed that Metal Gear Rising: Revengeance would appear on Steam “any day now” and they weren’t lying. You can pre-purchase the game on Steam right now, and it’s also part of the Holiday Sale, discounted by 33 percent for the next 48 hours. After the sale it will still be reduced by 20 percent until launch day, on January 9.

The PC version of Metal Gear Rising: Revengeance comes with the VR missions and the two DLC missions, Bladestream and Jetwolf, which is a nice bonus for making us wait for so blooming long. As one would hope, this port comes with some PC bells and whistles like a variety of graphics tweaks like increasing how many cuts you can make via the new Zandeki option.

You’ll also be able to watch all of the cutscenes and codec conversations from the main menu, in case you miss anything, as well as replay the over-the-top boss battles.