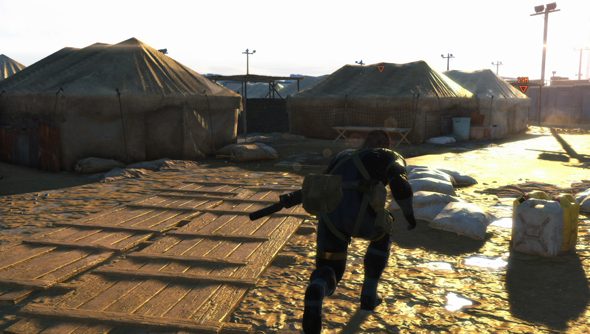 Have you heard? Metal Gear Solid is PC gaming and PC gaming is Metal Gear Solid. A whole platform-specific history of compellingly silly stealth is now ours to co-opt, and we too can enthuse about characters with names like Psycho Mantis and Decoy Octopus.

We’ve got two games floating in over the coming months, like goats strapped to so many balloons, and probably a third in the strapping form of a new Metal Gear Online.

The new Metal Gear Online is just the latest in a line of multiplayer spin-offs connected to the venerable crouch ‘n’ crawl series. In the past, it’s covered deathmatch, capture points, and other sneaky variants on competitive staples.

With specula-goggles engaged, we can surmise that the newly-announced iteration will be bundled with next year’s Metal Gear Solid 5: The Phantom Pain – the first full entry in the series to launch on PC as well as consoles.

The game will be shown by Mr Kojima himself at next Friday’s The Game Awards, Geoff Keighley’s new VGA-alike, and streamed in all sorts of places.

It’d be nice to have another multiplayer game with a predator-prey dynamic, wouldn’t it? Splinter Cell: Blacklist was dead good at that.