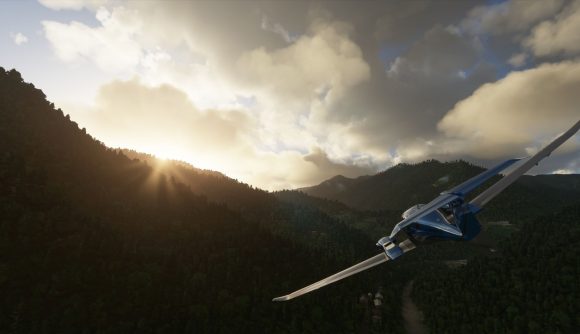 As it turns out, it’s not far off! Ismail live-tweeted the flight and notes on several occasions that the view outside of his window is pretty darn similar to the one he saw in-game. He tweets on several occasions that the weather, light, and stars all matched up perfectly at points during his flight. Ismail also posted a few pictures on Twitter to show the likeness off, and, yeah, it’s pretty darn cool.

Ismail does note that some of the timing was a wee bit out. He reached Ireland in-game six minutes before he did so in real life. He also touched down at his destination in the sim four minutes before the real plane did. Still, though, it’s impressive that the simulation game kept a decent pace.

If you’d like to check out Ismail’s journey, you can find the thread of tweets below:

This was takeoff, since that didn't upload earlier. I enabled the AI-self control the moment I felt acceleration. pic.twitter.com/1HSqMK1pd8

If you’ve not played the game yet, we’re pretty keen on it, too. In our Microsoft Flight Simulator review, we called it a “a visionary, landmark release that’s built with the long haul in mind”. That said, we do reckon “it will take a while for PC hardware to catch up with the game’s potential”.

Curious about what upcoming games are worth your time on PC? You know where to click.