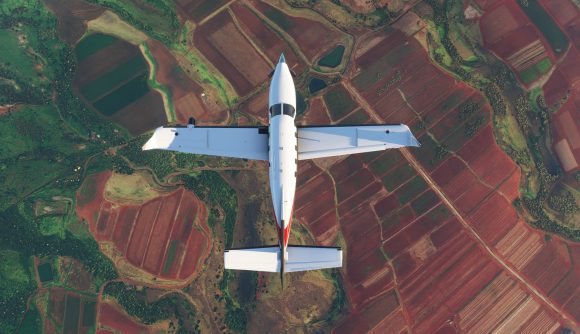 The exciting news just keeps on coming for Microsoft Flight Simulator fans this week. The simulation game’s big US world update has arrived, and now developer Asobo Studio has revealed there’s another on the way early next year – this time focused on the United Kingdom, which is set to land in January.

In a live Q&A session, the studio has unveiled MSFS’s latest development roadmap, giving a rough idea of what it plans to roll out over the next few months (it’s not been posted on the official site yet, but you can see it in the Twitch clip embedded below). In detailing what will be bundled into the sim over the next few major patches, Asobo has revealed that the UK world update will head to Flight Sim on January 26.

“We have awesome data for England, Wales, and Scotland,” head of MSFS Jorg Neumann says, explaining that it’s got “a completely new set of aerials,” and adding that the studio’s “trying hard” to get a bunch of data for not just Northern Ireland, but all of Ireland, too. As for specific airports, the dev says the studio’s “making a few”, such as as Manchester Barton, Liverpool EEGP, Land’s End, and more. Plus, there’ll be “roughly 50-60 POIs”, some new landing challenges, a new flight, and procedural buildings in the update, as well.

Additionally, players can expect more updates for the US portion of the sim’s world, too. At around the 16:00 mark, Neumann explains that the sheer size of the country and the complex process of ingesting Bing maps data in to the sim mean it’s a huge undertaking, and will require a “US Update 2 and a US Update 3, because it’s going to take that long to get the whole massive, massive country processed”.

There’s plenty more to find out in the clip above, and you can listen to what’s in store for January’s UK world update for yourself from around the 45:40 mark.