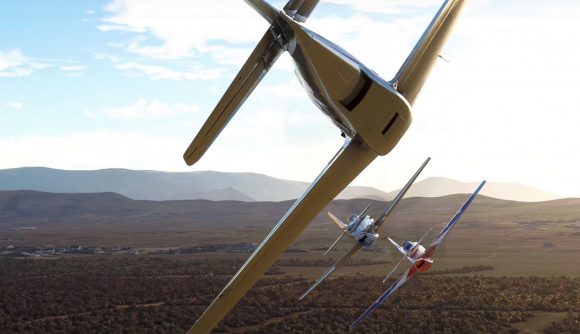 “Some of you, because you pay attention, saw that we actually skipped a World Update,” Neumann says in the stream (below). He explains that the team was thinking about launching one in October, but with so much else going on – the Xbox version, Game of the Year edition, and Reno Air Races DLC, for example – the devs thought, “let’s skip one and we’ll bring out World Update VII.” Neumann confirms that World Update VII launches on January 25 and that, with a drum roll-style buildup for effect, this’ll be focussing on enhancing Australia through various means.

“As always, we have a ton of POIs, we’ve got new DEM [digital elevation model] which is really cool, new aerials, and, in this case, what’s also really nice is the big maps team had a ton of city data, so we are busy crunching photogrammetry data right now.” Neumann adds that the team doesn’t “quite know yet how many cities we can have”, but he explains that they’ve “prioritised them” and, excitingly, adds that, “the one thing I’m pretty sure of is it’s going to be more 3D cities than we’ve had probably in any other World Update, which is neat.” Neat indeed.

There was no real detail about what’s to come with World Update VII shared beyond this announcement, but with it due out in a couple months, hopefully we’ll get to hear more soon. You can catch the announcement from the 5:36 mark below:

There was also a whole lot else to check out, so do get cosy and enjoy the stream in full if you’re keen to hear more about the game’s development progress, the devs take some community questions, and some other exciting teases for upcoming content (it sounds like there could be a Boeing 757 on the way, as Twinfinite reports).

For now, you can always go pick up the new Reno Air Races DLC if you’re keen for some experiences in MFS.