Microsoft has released a new set of official resources to help game devs port their DirectX 12-based games onto the Windows 7 operating system. Most notably this means that it will be possible to get Nvidia-supported DirectX Raytracing (DXR) games running on the older OS.

To some Windows 10 users that might seem entirely unnecessary – after all Windows 7 is an operating system that’s two generations behind – but with a 32% overall market share there are still a whole lot of Win7 users, and not far behind the percentage of people running the latest version of Microsoft’s OS on their PC. And that means a lot of potential gamers are being locked out of running all those DX12-based games.

All those DX 12 games… Admittedly DirectX 12 support seems to be taking a retrograde step recently, despite all the hype around Microsoft’s DirectX Raytracing and Nvidia’s RTX tech, which both rely on the more modern API to function. Part of the issue is that there’s often a good chance that you get either worse performance on DX12 versus DX11, or you get a less stable gaming experience.

But if DirectX 12 games can cater to 81% of the Windows install base, rather than just the 49% of users running Windows 10, that might make them more prevalent and encourage developers to actually use the benefits of the close-to-the-metal API, and maybe even the newer DXR/RTX effects too.

Even if you just take the 22% of Steam users running Windows 7, that’s still an awful lot of gamers currently being left out. 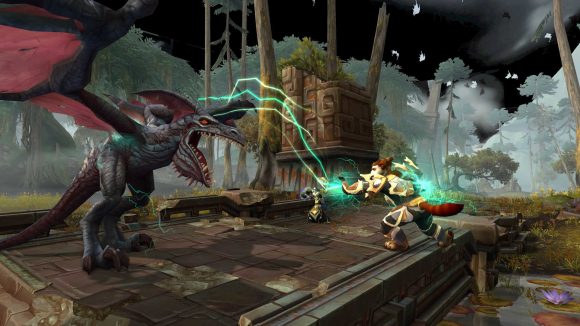 A post on the DirectX Developer Blog (via Hardware.Info) has reported on the publishing of three different resources to help devs get their DX12 games running happily on Windows 7. This follows the popular move of helping create a DirectX 12 version of World of Warcraft that works on the older, but still widely used, operating system.

“We announced ‘World of Warcraft uses DirectX 12 running on Windows 7’ back in March,” says Jianye Lu, program manager of the Graphics Team on the DirectX Developer Blog. “Since that time, we have received warm welcome from the gaming community, and we continued to work with several game studios to further evaluate this work.”

To that end these resources are now live for devs to use to port their DX12 games over to Windows 7:

We don’t know what the next DirectX 12 game might be to get the Windows 7 treatment, but the fact that these resources will potentially allow gamers on Win7 access to the full suite of ray traced titles using the DX12-based DXR API is exciting.

The Q&A at the bottom of the Development Guidance Document states that all DirectX 12 features in the Windows 10 October Update are supported, including DirectX Raytracing.

Want to see more DirectX12 games running on Windows 7? Join the conversation on this article’s Facebook and Twitter threads.