Microsoft has revealed a new level of haptic feedback that can be built into a rigid controller which makes it feel like you’re squeezing a stress ball between your thumb and forefinger. Yes, the TORC device is solid, but tricks your brain into thinking it’s squishy and in doing so Microsoft is suggesting that “oxymorons of haptics might be the new normal.”

Researchers Mike Sinclair, Eyal Ofek, Mar Gonzalez-Franco, and Christian Holz from Microsoft Research Redmond, along with KAIST intern, Jeajon Lee, have created this bizarre new form of haptic controller that allows you to interact more fully with a virtual world. Its sensor design can be built into any number of different devices, from traditional game pads and VR controllers, to the stylus you might use with a graphics tablet.

The current device fits in the palm of your hand – the prototype looks a little larger as it’s got a Vive Tracker strapped to the top for the VR helps – and despite having no moving parts can deliver “rich haptic feedback that allows high level of dexterity and compliance perception when manipulating virtual objects.” That’s research paper speak for “makes it feel like you’re actually fiddling with the things you’re holding in a virtual world.”

Microsoft has presented the TORC prototype on its Research Blog, introducing the concept of a controller built around primarily around the ability to fool your brain with a combination of haptic feedback and visual stimuli. It’s kinda like that classic experiment where humans can become so attached to an obviously fake arm they freak out when it gets stabbed in front of them.

Take control: These are the best PC controllers around

The TOuch Rigid Controller – or TORC, if you favour the researchers’ tortured acronym – is a fascinating concept device, “a proof-of-concept system, rendering haptic sensation of non-rigid, compliant materials using a rigid controller,” and could geunuinely bring a new level of immersion and tactility to virtual reality.

Current controllers, such as the Oculus Touch, do an impressive job of translating the movement of your digits into the virtual world, but don’t really do much in terms of delivering any recognisable sensations back.

TORC is different. Sure, it’s relatively small-scale, in terms of it only really being effective on small precision manipulation, but currently that’s also something VR does have a bit of a problem reproducing.

Because it’s built for a precision grip, the TORC is designed to be held between the two forefingers and the thumb. Beneath the fingers are a pair of sensors which deliver vibro-tactile sensations, with a pressure sensor set beneath the thumb. Above that pressure sensor, however, is a capacitance-based 2D trackpad set in parallel to the other two sensors.

It’s this trackpad that allows for the precise manipulation of objects. By sliding the thumb around the trackpad it translates into movement in the virtual world and, while your two fingers will in reality remain still, the virtual image will have them twisting counter to the motion of the thumb to deliver rotation.

The pressure sensor is also what’s responsible for the ‘squishing’ sensation.

“When holding an elastic object,” reads the blog post, “applying force on TORC squeezes the virtual object. Although the user’s physical fingers do not move, the combination of the visual stimuli accompanied with the rendered haptic sensation combines to form a compelling experience.” 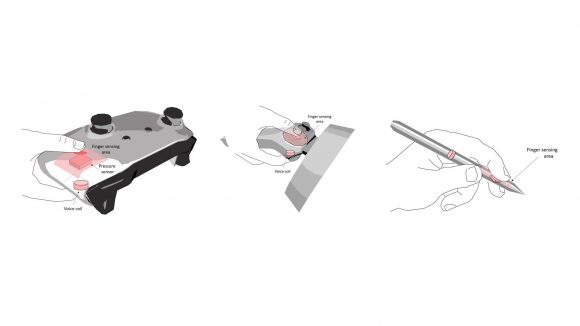 The touchpad is also able to deliver textural sensations too, reacting to materials in the virtual world and attempted to mimic their surfaces as you slide your thumb around the pad.

But the fact the sensor is already small enough, and robust enough, to be included in different styles of peripherals means that unlike most of the weird VR peripherals we’ve seen (and we’ve seen some really weird ones) TORC has a better chance than most of actually seeing the light of commercial day.

{"schema":{"page":{"content":{"headline":"Microsoft’s oxymoronic controller could be the most immersive VR peripheral yet","type":"news","category":"microsoft"},"user":{"loginstatus":false},"game":{"publisher":null,"genre":null,"title":"Microsoft","genres":null}}}}