Microsoft has given the go-ahead for the disclosure of (near-enough) the entire Xbox Series X specification – and it’s a lot less like a gaming PC than its AMD Zen 2 and RDNA 2 silicon first suggested… and a whole lot smarter.

The specifications of Microsoft’s upcoming high-end console (back in my day that would’ve been an oxymoron) have been detailed over in an Xbox blog titled: “Xbox Series X: A Closer Look at the Technology Powering the Next Generation”, and expanded upon by Digital Foundry’s Richard Leadbetter. In which, there’s plenty to dig your teeth into regarding the Zen 2 and RDNA 2 silicon powering the console and the clever and bespoke technologies it’s utilising to hit its lofty efficiency and performance targets.

So let’s start with the metal. At its core lies an AMD-built 52 CU (3,328 core) RDNA 2 GPU, built on the 7nm enhanced node (not EUV, so there’s your answer to that 7nm+ quandary) and running at 1,825MHz, period. Microsoft’s not touting any kind of boost clock with this one. That’s also technically a 56 CU part, as widely suspected, but four cores have been disabled to improve yields.

What does this tell us about RDNA 2 ahead of its PC gaming debut? Prior to the latest disclosure it was suspected that a first-gen RDNA GPU would require either 56 CUs at 1.6GHz or 48 CUs at 2GHz to reach the Xbox’s 12 TFLOPS performance target. With the latest numbers confirming a specification equidistant between the two in both CUs and clock speed, we can assume that AMD’s RDNA 2 upheaval will prove a feature-focused change more so than a raw performance uplift. 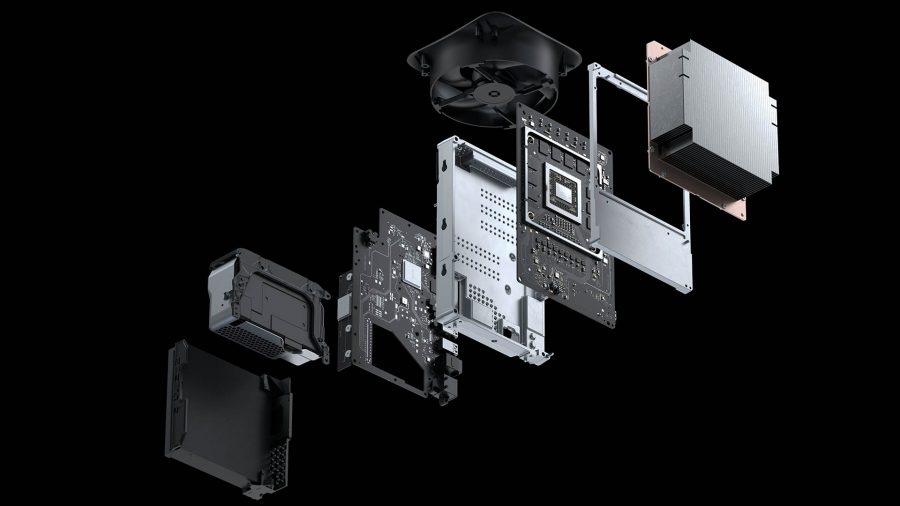 Of course, that’s largely the inclusion of ray tracing acceleration hardware. RDNA 2 is built to support the latest DXR 1.1 standard, and will utilise onboard silicon to accelerate certain compute-heavy tasks in the ray tracing pipeline, much like Nvidia Turing. The RT Cores in Turing accelerate Bounding Volume Hierarchy (BVH) construction and ray/triangle intersection to offload from traditional GPU shader cores. AMD’s approach is expected to operate in much the same way.

But unlike Turing, RDNA 2 will make use of a novel inference technique in lieu of dedicated AI cores like Nvidia’s Tensor Cores – which are currently used for denoising tasks. As Digital Foundry notes, “rapid-packed math is back”, and RDNA 2 is built to focus on even lower precision integer operations in order to accelerate inference.

In keeping with Turing, however, mesh shaders are being opted for with RDNA 2. Nvidia implemented these to simplify geometry pipelines, turning them towards the compute programming model, and delivering more bang for your buck (in computational terms).

This GPU will share access to 16GB of GDDR6, across a 320-bit interface, with an eight-core Zen 2 CPU. Beefier than past console spec, the Series X will run at 3.8GHz with simultaneous multi-threading disabled, or 3.66GHz with a total of 16 threads. 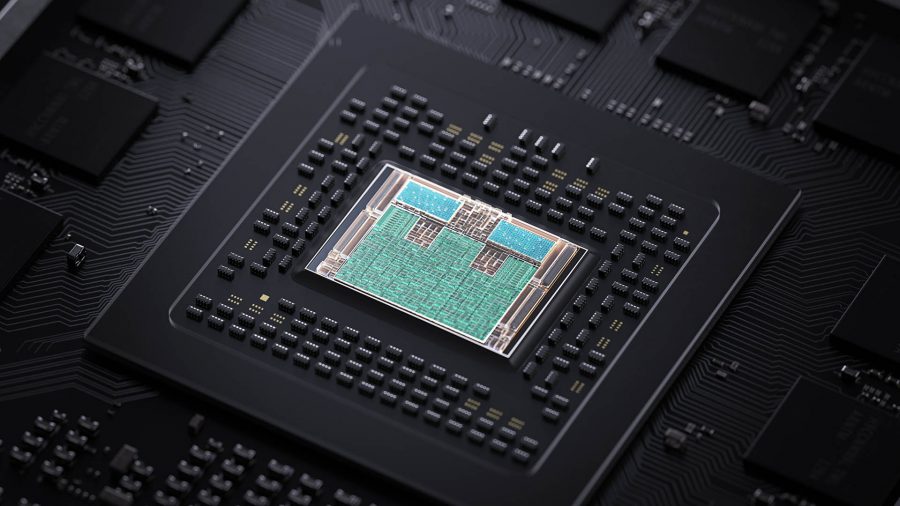 Zen 2, RDNA… all that sounds rather familiar to PC gaming, right? Well, that’s where things take a rather dramatic turn into the unfamiliar.

While a shared memory pool is nothing new for console design, Microsoft is implementing an asymmetrical 10GB of 560GB/s for the GPU and 6GB at 336GB/s in order to improve overall efficiency.

And that slightly stubby NVMe SSD (which appears to run at PCIe 4.0 x2 speeds, ~2.5GB/s) will be complimented by a dedicated high-speed decompression block capable of 6GB/s, thus ensuring, in theory, this crucial task is never bottlenecked by the CPU. This is all a part of the proprietary ‘Velocity Architecture’ built into the console.

We challenged ourselves to identify every opportunity to further reduce latency

This has been built around a brand new compression system called BCPack, developed specifically for GPU texture files. It also includes allocations for Sampler Feedback Streaming (SFS) and DirectStorage techniques to minimise GPU memory demands and reduce file overhead, which should, in turn, reduce the strain of game textures on the system – an important step in mitigating 4K load times and performance.

The Velocity Architecture is also key to the Xbox Series X’s Quick Resume. This feature allows users to cycle games on demand without delay. Neat.

“Competitive gamers and the best gaming experiences demand precise, responsive controls,” Andrew Goossen says in an Xbox blog post. “The Xbox team analyzed the entire end to end input pipeline, from the controller to the console and from the console to the display and we challenged ourselves to identify every opportunity to further reduce latency to provide the best experience for gamers on Xbox.”

In order to drop innate system latency, Microsoft has been revamping the entire system pipeline. One technology integral to that process is Dynamic Latency Input (DLI), further reducing momentary lapses between user input and the render pipeline. 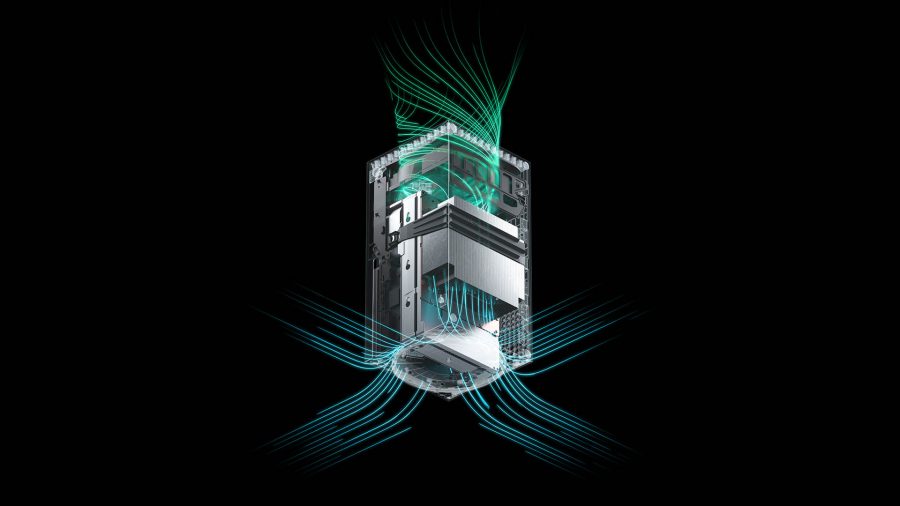 And we’re not done yet. There are also a heap of machine learning algorithms utilised with DirectML, such as a “HDR reconstruction technique” designed to infer an expanded range from SDR content. And while there remain but a few specifics regarding the Xbox Series X custom spatial audio processing, it appears to be yet another custom chip designed to offload from the CPU, improve quality, and make for more efficient hardware.

So the Xbox Series X isn’t quite as familiar to PC towers as we first suspected, which may see developers once again dividing their time between console/PC. That is, if these proprietary features prove worthy of their time. Sure, Microsoft’s bounty of first-party studios will be keen to optimise for the hardware, but will anyone else? We’ll have to wait and see how that shakes out, but you can be sure it will be a few years into this console’s lifespan before developers really get a handle on what it is capable of – all the while AMD Zen 3 and (next) next-gen GPU architectures rise and fall.

Hell, maybe we’ll see a little more of these bespoke audio chips, memory optimisations, and latency obliterating technologies make their way into mainline PC development in that time, too. It’s not like unified cache architectures, high-bandwidth interconnects, and AI workloads aren’t all the rage in supercomputers right now, which bear some similarities. The DirectML and DirectStorage stuff is sure to hit Windows at some point or another. There’s a lot of potential in Microsoft and AMD’s console collaboration that could supercharge just about any gaming machine – the Xbox Series X is an exciting teaser of what could be with just a little cooperation.

Yet even with custom silicon dividing once again a thorn in the side of PC and console cooperation for the moment, we will share something: empty bank accounts. There’s no way all of that custom console tech won’t set you back something fierce.