Middle-earth: Shadow of Mordor looks like it’s draped in the skin of Assassin’s Creed, at first. Icons popping up all over the map, villains to kill swiftly and silently, a pretty crap story – it’s familiar. But the skin is dirty and caked in blood. Shadow of Mordor delights in gore and decapitations.

Beneath the skin, though, Monolith’s grim action game shows itself to be so much more than a Lord of the Rings-themed imitation of Ubisoft’s cash cow. And it’s all down to one hook that gets caught in every aspect of the game: the Nemesis system.

Every single one of Shadow of Mordor’s hideous, twisted Uruks has the potential to become one of protagonist Talion’s nemeses. There’s a hierarchy in Mordor based on strength, and whenever an Uruk “kills” Talion, they become a captain and start rising through the ranks of Sauron’s army. 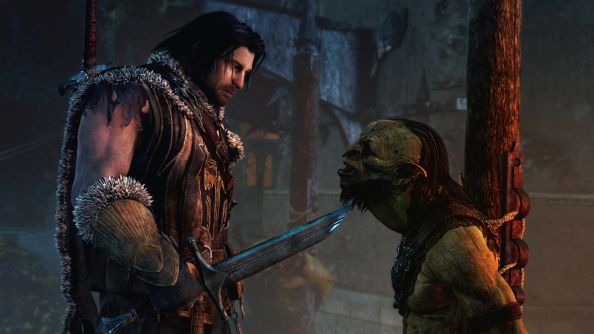 A simple slip up leading to an early demise can spawn a long, hateful relationship with one of the green horde. You hunt him to get revenge and poison the grog barrels at one of his feasts, but he survives. While you’re in a duel with another Uruk, he appears with his warriors and joins the fray. You unleash giant monsters on him when he’s patrolling, he ambushes you when you’re infiltrating a fortress.

It usually ends the way all relationships do: the Uruk is burned with a magical brand that makes him a slave, forced to fight his masters and probably die.

Throughout the game, these relationships form, and they affect the growth of both Talion and his enemy. As Uruks move up the ranks to gain more skills and resistances, though likes a few more scars as well, while Talion gains experience from each fight, unlocking new powers and fancy spectral attacks. He’s been possessed by a ghost you see. It’s not important. 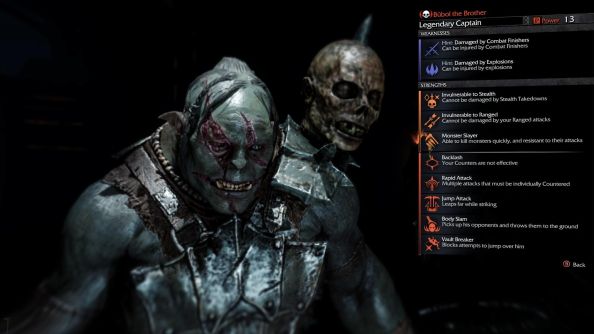 While these Uruks are randomly generated, the illusion is impressive, and they grow into real characters. I wrote a love letter to one particular nemesis, Grublik the Black, a proper bastard that I miss dearly. My encounters with him formed a character arc, a narrative that was organic, that gave me agency, and was just as effective as something that’s scripted.

By Shadow of Mordor’s second half, the Nemesis system swallows the game entirely. With the power to brand Uruks, players take on the role of puppet master, creating civil war in Mordor, gaining armies of monstrous supporters. It’s a game within a game that eventually dwarfs everything else. Setting captains and war chiefs against each other, slowly growing allies like little Orc Pokemon, you can carve out a nice little kingdom in Sauron’s realm.

With the game finished, my thoughts immediately turned to other properties or settings that a system like this could be built into. It’s the type of feature that’s too good not to grow and stretch out across other games. Conveniently, when Shadow of Mordor ends, the world remains open, so the Uruk intrigue can keep on going.