This is the story of a very complicated relationship between man and orc; a tale of revenge and begrudging admiration. Over the last day, I’ve travelled all over Mordor with one single goal: kill Grublik the Black. This quest has consumed me.

I’d never heard of Grublik the Black when we first met. He was a Uruk captain, one of Middle-earth: Shadow of Mordor’s procedurally generated sub-bosses, while I was a ranger who was all cut up about the death of his wife and son. We didn’t run in the same circles. But I’ll never forget the first time our eyes locked on the battlefield. It was hate at first sight. 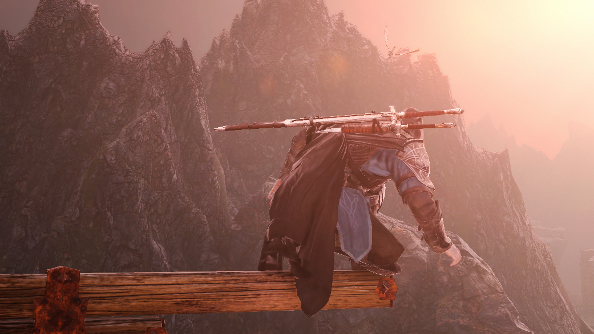 I was perched on top of a crumbling ruin, watching a duel between two Uruk captains. It seemed important at the time, but I no longer even remember their names. I was there to interfere with the duel and to make sure neither lived to see another gloomy Mordor day.

Both were in bad shape, bleeding from a thousand cuts – that’s when I struck. I leaped down, killing two of the cheering orcs watching the bloody display and charged towards the combatants. One of them fled like a coward, but the other stood his ground and faced me. Despite his injuries, it was a tough fight – he had numbers on his side, a whole cohort of angry, shrieking monsters.

We danced around each other, trading blows, and that’s when I spotted Grublik. The ugly bastard came charging in, surrounded by his own little army, and started yelling insults, which I thought was extremely rude given that I was trying to concentrate on killing his fellow captain. All my plans fell apart when Grublik joined the battle.

I tried to escape, but there was a sea of orcs between me and freedom. As spears and arrows pierced my armour, Grublik strolled up to me, smacked me on the noggin with his savage weapon, and laughed as I fell to the ground. 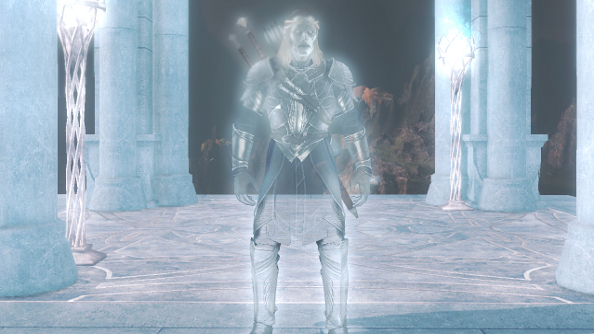 Freshly resurrected, far from the site of my failure, I was seething. I’m trying to quit smoking at the moment, but this embarrassment forced me to hang out the window of my study and puff away, angrily. In the smoke, I could see his face, taunting me. I wasn’t going to take this lying down, though. I would have my vengeance.

Grublik’s victory had increased his station, gaining him the respect of his ‘orrible orc chums. An ambitious bugger, the captain was attempting to build on this infamy by executing a treacherous peer. Okay, I thought, time to screw up his plans like he screwed up mine. I legged it to the execution site and watched as the orcs prepared.

Before my nemesis could lop the head off his victim, I pounced. He wasn’t too chuffed about seeing me return from the dead, and I confess that this hurt my feelings a little bit. With his minions in tow, he ran at me, and the execution site became a mess of dismembered limbs, snarling monsters and black blood. 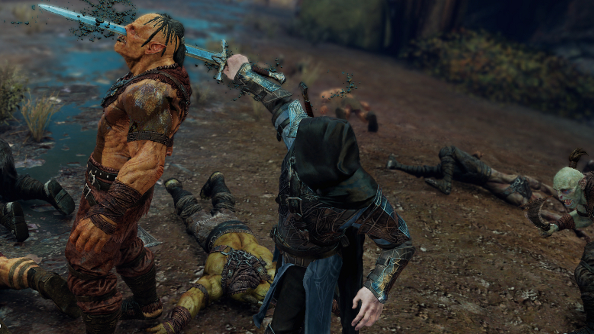 The battle went on and on. I’d whittle Grublik’s health down, but then he’d call more of his minions with a blast of his horn, and he’d embrace the pain, regenerating. He seemed indestructible. Also, my fingers were growing tired and there was an open packet of crisps right next to me that I really wanted to eat. Things were getting tense.

This bloody brawl did end, though. My nemesis was faltering and I was ready to ram home my sword one last time. The screen glowed red, I was close to death, but I was closer to victory. Then I wasn’t. An arrow thudded into my back, and that was that. One of Grublik’s little monsters has climbed up onto a wall behind me and murdered me without any honour. His reward for killing me was a promotion to captain. 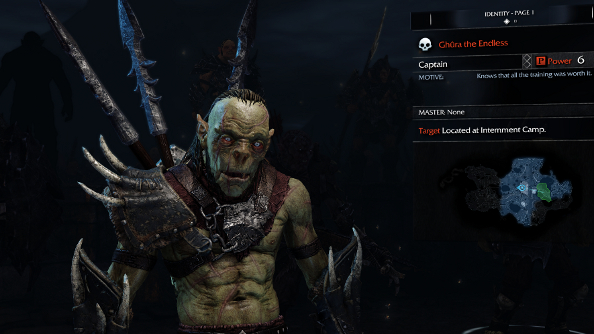 Round and round we went. I’d find out Grublik was out hunting monsters, hosting a feast, brawling with another captain or about to be ambushed, and I’d make sure I was there to piss him off. Sometimes he’d win, but other times he’d flee or I’d leave him for dead, only for him to crop up again. His body became a canvass of scars and injuries, and he started walking with a limp. But his power and influence grew, until he was greater than any other captain.

I started to question my obsession, my need to kill this one Uruk. What had I achieved? I’d only helped Grublik, and worse, my deaths had helped create new captains like Ghura the Endless and his chum, Thakrak the Fool. I’d become Sauron’s number one recruiter. And it was hard not to admire my nemesis. He started off as a nobody, and had worked his way up the ladder to become a legendary captain and a bodyguard to one of the infamous war chiefs.

He was Magneto to my Xavier. 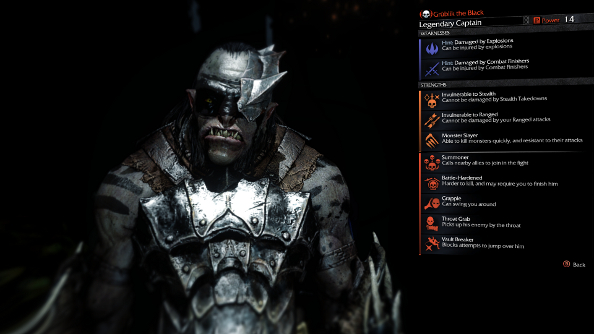 But it had to end. He had grown in power, yet so had I. Now I was riding beasts into battle, pinning fleeing enemies to the ground with arrows, and killing other captains from the shadows without breaking a sweat. It was time to end this feud; it was time to end Grublik the Black.

I tracked him to a ruined tower, where his orcs were organising human slaves, preparing to march out and put them to work in one of Mordor’s foul industrial complexes. Grublik wandered the area, keeping an eye on his lessers. Ghura was another problem. The one-time minion of Grublik’s, now a captain, was still by his old master’s side. I’d need to fight both of them together. I had a plan, though. A very messy one.

Unlike my nemesis, Ghura was a cowardly little Uruk. He was scared of bees and the nasty monsters I’d learned how to ride, caragors. And as it happened, there were two of the latter in cages in the camp, and a hive of the horrid little insects close to where Ghura and Grublik were patrolling. Unleashing them would be my opening move. 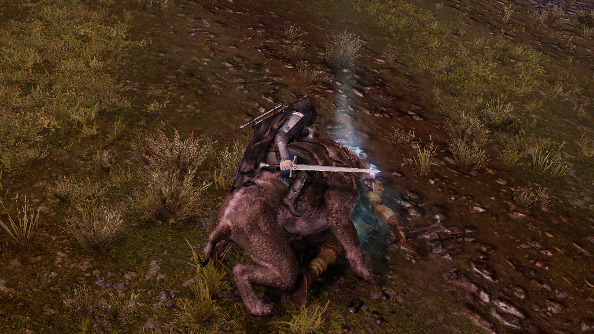 An arrow from my bow knocked the hive right on top of the little bugger, who ran off screaming. I’d separated the captains. To make sure that they stayed split up, I broke open the cage of one of the caragors, who started to lay into the now crying Uruk. I had Grublik all to myself.

“Man give me new scar,” Grublik snarled, remembering our last fight. “I give you bigger scar!” He was not exactly a towering intellect. The camp was in chaos thanks to my insect and caragor chums, so I didn’t need to worry about too many minions aiding my nemesis. In fact, things were going supremely well. I did have to adjust my tactics, though, as he’d developed some new skills that neutralised a few of my own. Still, he struggled to match me.

Then this fucker appeared: 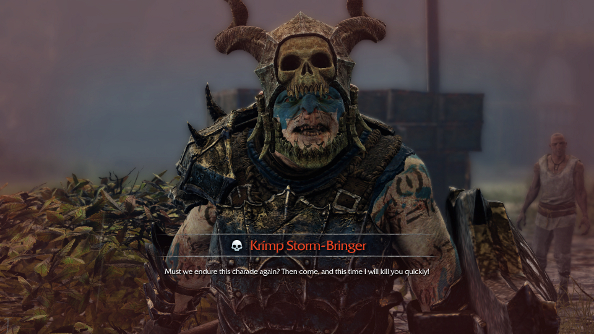 Krimp and I went way back. He’d killed me when I was attempting to free some slaves, and while we hadn’t seen each other in a while – and I didn’t have his number – I was still often in his thoughts. He’d also been working out, and had climbed his way up the ladder by murdering at least three of his fellow captains. He was bad news. And he’d brought friends.

I’d left one caragor in its cage for just such a surprise. I shot the lock off, and the beast rammed straight into Krimp, knocking him down before gnawing at his leg with its gargantuan maw. After dealing with Krimp’s horde, I turned back to Grublik once more, my blade glowing with the deaths of countless orcs. I beat him down, until he was on his knees.

At that moment, I actually contemplated letting him live. That’s what proper heroes do, isn’t it? They beat up the villains, showing how much mightier good is, and then let them go so that franchises can develop and characters can be recycled forever and ever. But then I looked at Krimp, who had almost killed my caragor buddy. Nah, I’d never run out of Uruks.

I put Grublik in the ground. 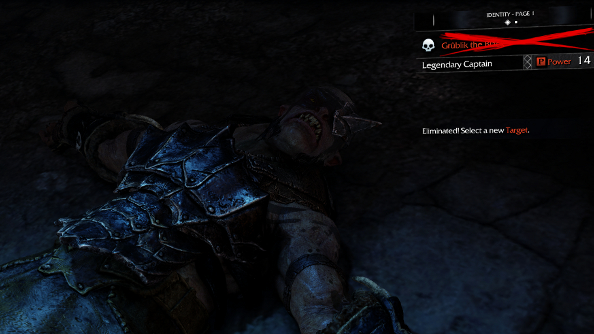 Rest in peace, Grublik the Black. You were a terrible arsehole.