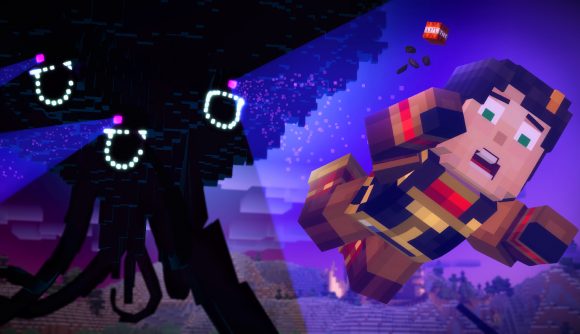 June 4, 2019 Minecraft: Story Mode will continue to be available for download if you purchased it on GOG.

Minecraft: Story Mode – alongside many other Telltale games – has been removed from sale on digital storefronts after the developer’s closure. Last week, Minecraft proprietor Mojang put out a statement which suggested that the Story Mode series would no longer be available for download after June 25, even if you’d already purchased them.

It seems that GOG will be an exception, as a forum post explains that “in our publisher agreements we make sure that delisted games remain available to users who bought them.” Mojang’s original statement mentions no specific PC storefronts, only listing out the hardware platforms the game has released on.

The GOG post continues, “Minecraft: Story Mode, as well as others on GOG.COM, will be available for those customers who purchased them before and will be downloadable both through GOG GALAXY client and DRM-free installers. Feel free to download it and play anytime you want. If any technical issues appear, you can contact GOG Support directly and we’ll do our best to help you.”

Mojang’s statement was worded just vaguely enough to be confusing, but the message urged customers who have purchased either or both seasons of Minecraft: Story Mode on any platform to download any remaining episodes before the deadline this month.

In a further statement to USgamer, Mojang says “the Minecraft team currently has no plans to take over Minecraft: Story Mode from Telltale.” That’s in contrast to Borderlands publisher 2K, which says it is trying to get Tales from the Borderlands back up for sale “as soon as possible.”

Generally speaking, games that are delisted from Steam are still available to download in Steam users’ libraries – that’s was the case with Red Candles’ Devotion and for Paranautical Activity when they disappeared from Steam’s storefront.

But the wording in Mojang’s latest message strongly suggests that Minecraft: Story Mode will be completely unavailable to download after June 25. “As you might have heard, its publisher is no longer in business, which unfortunately means that Minecraft: Story Mode will no longer be supported,” the update reads. “If you have purchased these seasons, please download all remaining episodes prior to the service being discontinued in June.”

GOG is apparently an exception to the delisting, but whether any other storefronts – including Steam – will let you keep playing Minecraft: Story Mode remains to be seen. In the meantime, you’ll probably want to make some backups regardless.