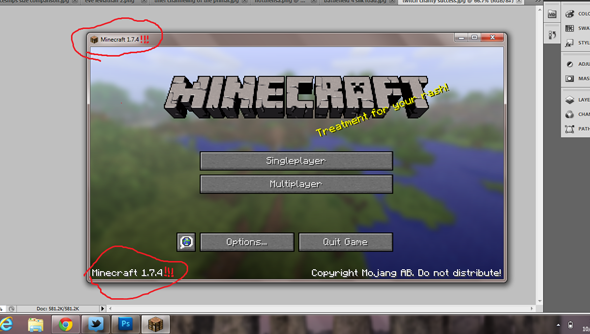 I love that the bits of Minecraft’s code that are visible to players are full of little boasts. This launcher loaded in 0.94 secs! The server built a world in less time that it takes you to build toast!

Sometimes though, there’s not enough fanfare. Unless you’re a regular consumer of Mojang’s snapshot updates, for instance, you’re unlikely to know that today is the day the Twitch integration announced at Minecon finally hits the game.

Minecraft 1.7.4 has been released through the launcher. Server jar: https://t.co/uauKobRuaI

The integrated functionality has reported been “very stable” in the last few snapshots, so broadcasters old and new shouldn’t encounter any problems here. Minecraft now offers streaming straight to Twitch at a cursory push of the F6 button – though you’ll need patience enough to suffer a few extra clicks in setting it up first.

Before booting up the game, you’ll need to head to your Mojang settings on the developer’s site. Once you’ve forgotten your password six or seven times and had to have a skeleton key sent to your inbox, you can knot your account to its Twitch counterpart from that page.

Head to the in-game ‘broadcast options’ menu to play with the quality settings (you’ll need to upgrade your Minecraft account to a Mojang one if you haven’t done so already), and away you go. I’d suggest mouthing along to Radio 4 to perfect your broadcast voice, rather than mimicking the tire-some-mon-o-tone that suggests certain YouTubers are playing for time (and wasting ours).

I’m afraid you’ll have to be running Windows from Vista up, or Mac OS X Lion (10.7) or higher, to participate. But I imagine that won’t trouble you lot, will it?