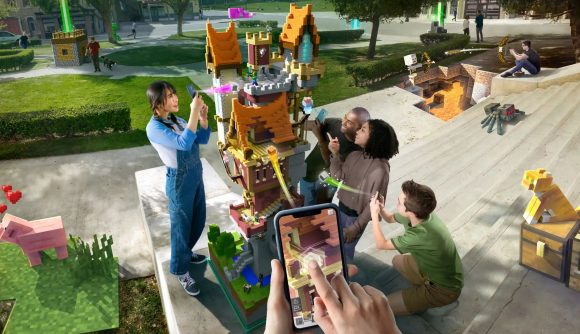 The Minecraft Earth beta has begun and its first users are exploring the block-building potential of augmented reality. The closed beta is available to players who signed-up ahead of the start date and live in either London or Seattle, the two cities which are playing host to the first tests.

The only gameplay we’ve seen of the Pokemon Go-esque AR game is from the Apple Worldwide Developers Conference demo last month and the Minecraft Earth: Closed Beta Announcement video. But, as Eurogamer notes, anyone who signed up to the beta is allowed to post gameplay impressions and videos of their experiences, meaning we can finally get a closer look at how the game will play out.

If you want to start building, head into the build plate, a section of the game where your resources have been collected, and start creating. You can also save and move your structures, transporting your creation from your dining room table to a big, open park.

Many of the designs in beta testers’ videos have been pretty rudimentary so far, but it probably won’t be long until the community starts building spectacular wonders as they have in the base game.

A little feature that players have highlighted in Minecraft Earth is that if you are playing in a car or on public transport your little character will ride a minecart.

There has been no full release date announced for Minecraft Earth but the likelihood of it arriving on PC seems pretty slim. Although the closed beta is underway you can still check out the Minecraft website sign up for future updates and opportunities.