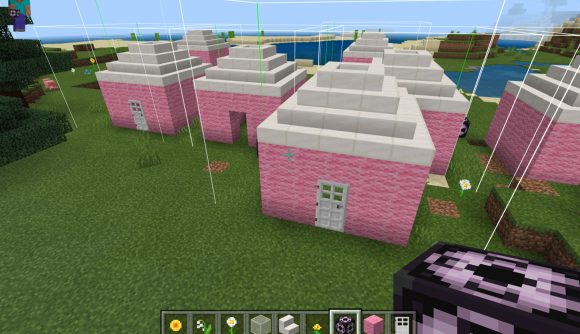 Minecraft’s structure blocks have been letting Creative players copy and paste their constructions for ages, but that benefit has only been available to Java Edition users. Now, finally, the convenience of structure blocks is available in Bedrock Edition – at least, as long as you’re willing to risk the potential instability of the current beta version.

Structure blocks have made their debut in the latest Bedrock beta, which you can join as always through the Xbox Insider Hub. The new implementation of structure blocks is a bit more user-friendly, including a new interface to make it easier to precisely save and load your creations.

You’ve got precision controls over the X, Y, and Z spaces of your selection, and you can toggle the inclusion of mobs through an ‘Include Entities’ switch. Or, if you only want to copy NPCs, you can hit the ‘Remove Blocks’ switch and fill your world with mob armies. You can check out the new interface in detail on the official site.

There are a few other additions in the beta patch notes, including the fox – also making its Bedrock debut in this latest update.

Read more: Get into the best Minecraft mods

If you’re in a testing mood, you can also try the Minecraft combat changes, which aim to unify the battle system in a way that makes sense across all versions of the game.