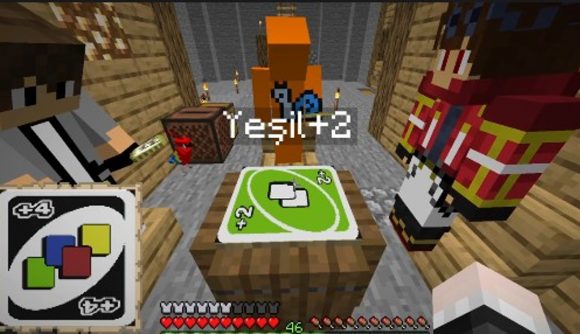 Have you every played Uno? It’s all about losing your hand the quickest, and it tends to bring out the shark in anyone who plays. Someone’s made a fully functioning version in Minecraft, and the multiplayer game is no less ruthless.

Uno has its own, specific kind of 108 card deck, and rounds can involve up to four players. Reddit user pr0mers built an entire Uno structure to facilitate them and three others sitting around a small table, screwing each other over through making them draw more cards, changing the colour, or skipping their turn. Under the table is a minecart that takes the cards, and leads them back to into the mechanism that distributes them back out.

Cards are drawn from the deck through a chest that, when activated, is given a seemingly-random card from the deck, each player does this until they’ve a full hand. The cards have all been designed using different kinds of redstone, and shulkers that match up to the values of said redstone then hand them out. It’s an elaborate system, but it works, as you can see in the video below.

The creator has promised on tutorial, to let others make the same thing for themselves. Minecraft is getting remarkably close to 140 million monthly active players, and with creativity like this, it’s not hard to see why. Here’s everything we know about Minecraft 1.17 – Caves and Cliffs.