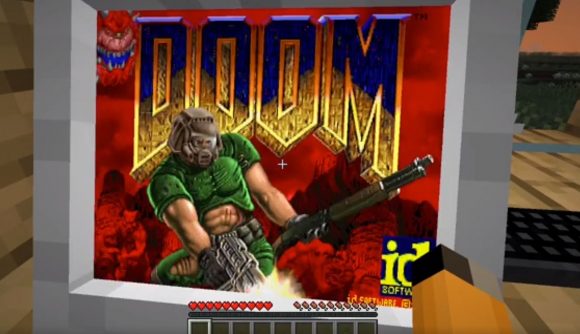 There are already plenty of incredible Minecraft mods to be found online, overhauling everything from the sandbox game’s exploration to its resource automaton, and there’s another to join the list that’ll let you put together an actual, working PC in-game. With a case, working parts, ISO imports, and everything. Oh, and the chance to play Doom in Minecraft.

“Order yourself computer parts from a satellite orbiting around your Minecraft world to build a computer that actually works!” the VM Computers mod’s creator Delta2force announces on its page at Minecraft modding site CurseForge. According to the page, it seems you order your dream (virtual Minecraft) PC’s component parts individually by creating an “ordering tablet” from your crafting menu, then wait for a satellite – which “orbits the Minecraft world five times a day” – to appear overhead.

“The menus are plastered with guides and you should be able to order yourself some items pretty quickly,” the modder explains. Once you’ve placed your order and received your goodies, you’ll need to create a virtual hard drive, and get started importing ISOs, setting it up with a case, and, well, using your very own blocky PC.

It’s worth noting, though, that because the mod uses a VM, it’ll use space, CPU, and RAM from your actual PC.

Here’s a clip of the mod in action, showing the little virtual PC doing everything a big PC can do – including fire up Microsoft Paint and even play Doom:

I made a minecraft mod with which you can build computers that work as virtual machines, so they’re basically real computers. You order the computer parts from space using a tablet. from gaming

If you’re keen to grab the mod for yourself, head to its page here. Be sure to take a note of the modder’s instructions and advice (particularly their note about possible impact on VirtualBox settings) and, as ever, mod at your own risk!