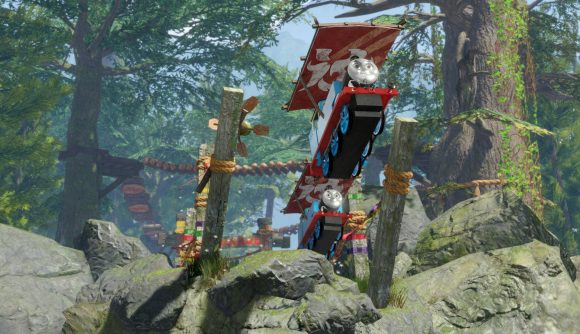 It was only a matter of time. When limited-time console exclusives come to PC they’re often swiftly hit with the modding treatment. The Final Fantasy 7 remaster’s sombre tone was lightened up by the sight of Cloud in a pretty dress confronting a clowned-up Sephiroth, and, boy, the less said about whatever happened to God of War’s Kratos here the better. Now, though, it’s Monster Hunter Rise’s turn.

UberGrainy’s Thomas the Tank Engine mod on Nexus Mods takes the game’s wolf-like palamute and turns them into the well-known train. More specifically, the modder explains that the mod works by replacing the golden retriever’s layered or sinister armour. As ever, it’s worth noting that this mod isn’t endorsed by Mattel.

Monster Hunter Rise has got several mods since it came to our humble platform, though most of them are quality-of-life tweaks. At the time of writing, the most popular mods involve making monsters’ health bar visible and other handy additions.

You may find some Monster Hunter Rise PC save bugs, though rest assured as the Capcom is still investigating them “as a priority”.

For more of the best PC RPGs, you can follow that link.