With Monster Hunter: World and its Iceborne expansion proving that the series has a huge audience on PC, you’d think the next Monster Hunter game we’d see on our fair platform would be the celebrated follow-up, Monster Hunter Rise (our sister site Pocket Tactics has a review). Instead we're getting Monster Hunter Stories 2: Wings of Ruin, a sequel to the 3DS spinoff that apes Pokémon's turn-based battle system and monster collecting.

While it certainly helps if you've played the original 3DS RPG, Monster Hunter Stories 2's narrative is self-contained. You play as a rookie rider from Hakolo Island, who is called upon to investigate why Rathalos have started leaving the island.

There's a proper Saturday-morning cartoon tone about the narrative that suits the more colourful, softer visual style of the Stories subseries. Don't expect too much in terms of complexity or mature themes – this is simple, hearty fare – although the Felyne companion Navirou might put some dark thoughts in your head as it relentlessly squawks instructions at you.

Much like in the first Stories game, combat in Wings of Ruin takes the form of Pokémon-like turn-based battles where you fight alongside companion monsties. Every attack, both from your rider and their monsties, falls into one of three categories: technical, power, and speed. Like in a game of rock-paper-scissors, each of these attack types counters – and can be countered by – one of the other three. You can’t pick your monstie’s attack, but you can select monsties that skew toward one of the attack types, and you can pick your rider’s attack type each turn. Correctly anticipating and countering your enemy’s attack delivers a super effective strike that deals high damage. 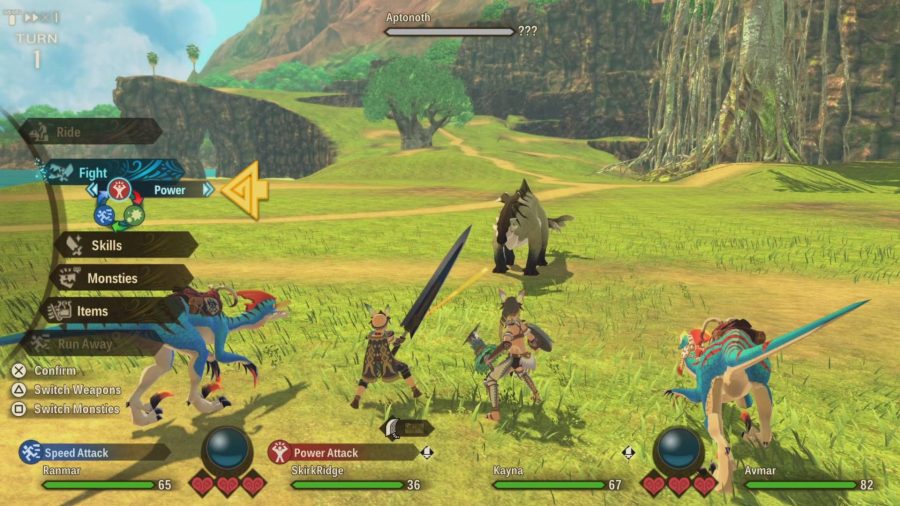 There’s plenty of nuance to this turn-based battle system. As you progress through a battle with the same monstie you’ll fill up a kinship gauge, which allows you to unleash some of your monstie’s most powerful skills. You can also break monster parts to stagger them and open up weak points, which is a neat nod to the main series.

Where things get a bit more complicated is with equipment management and gene manipulation. In every battle you’re given the choice between slaying monsters for materials to make new weapons and armour (crafting is much more straightforward here than in the main series), or throwing paintballs at them so they flee. Why would you want to do that? Well, if you follow the fleeing monster back to its nest you can pinch its eggs while they sleep. Each egg you hatch gives you a selection of genes that can be transferred over to your favourite monstie. There’s a lot potential here, such as giving a Yian Kut-Ku’s fireball gene to a Nargacuga, and Monster Hunter fans should get a kick out of creating their dream monster.

Catch ’em all: Here are the best games like Monster Hunter

This gene-sharing mechanic creates an extra reason to get grinding, and it’s not long before you find yourself training up monsties just to extract their precious genes and give them to your main pets – best not to dwell on how messed up that is. Slaying monsters along the way also grants plenty of materials and monster parts that you can use to make fashionable, protective garments and massive swords, so it always feels like you’re being rewarded for your efforts. 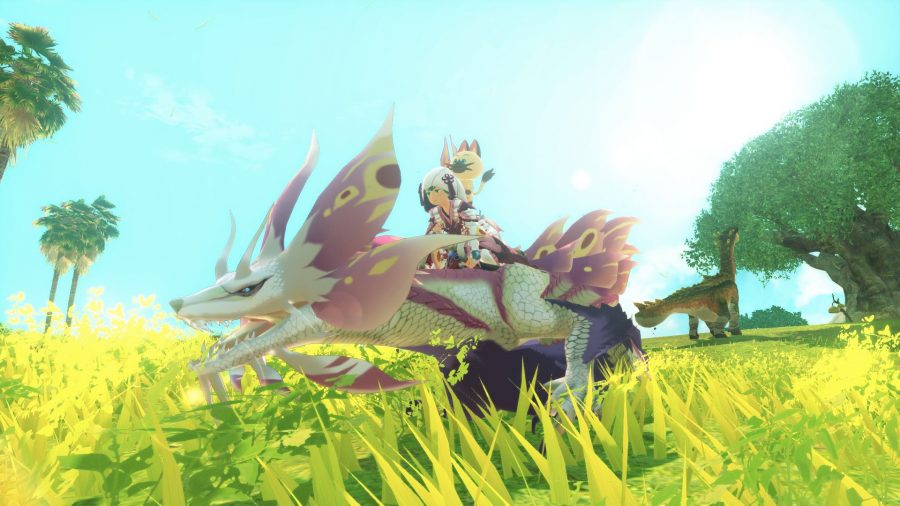 It’s only when you come up against tough boss encounters that this level of micromanagement begins to matter. Thankfully, there are fast-forward options for most battles and even a quick-finish command if your party is a much higher level, which accelerates the training grind.

If you’re coming to Stories 2 from Monster Hunter: World then it’s certainly a very different prospect. It’s less action-packed, and if you’re not a fan of cartoon melodrama then the cinematics and dialogue might begin to grate after a few hours. On the other hand, it’s a much more approachable and digestible version of the same exuberant world, and the switch to turn-based combat provides the perfect introduction to the series for newcomers. Oh, and if you’re after a Pokémon game on PC then Stories 2 should absolutely be on your radar.