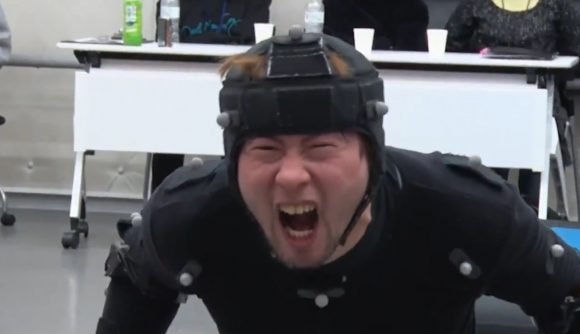 Human actors do motion capture for the monsters in Capcom’s Monster Hunter World. If this revelation wasn’t joyous enough for you, the studio has also released footage of one such mocap session. The video details how Rajang’s introduction scene was put together – if you’re just getting into Iceborne with the PC release, you’ll get to see the monster in-game next month.

You can scroll on down to watch the mocap video for yourself, but the Rajang actor is an absolute delight who does not hold anything back. He roars, he beats his chest, he stalks around on hands and knees, and he gives violent authority to the bit where the creature rips off the horn of an enemy monster – except in real life, he tears a plastic bottle off of a nearly-indescribable blanket contraption.

It’s not the first time Capcom has shared its delightfully goofy behind-the-scenes material. Devil May Cry 5’s live-action cutscene DLC which seemed so confusing pre-release turned out to be test footage with real humans pantomiming wacky DMC action on non-existant sets, and it was incredible.

You can watch the MHW Rajang mocap footage below.

Rajang debuts for PC players in a February 6 title update. The Iceborne roadmap details everything to expect through April, which is when the PC version of MHW finally catches up to its console counterparts.