Coming up with your own Mordhau builds is a daunting task and your distinct playstyle might only emerge after a number of hours of play. Triternion’s slasher is a complex beast to learn even if you want to survive for a few minutes, let alone master its deepest intricacies. So, we’re here to give you some food for thought with the best Mordhau builds around.

The best way to dip your toe in the bloody trenches of Mordhau is to pick a Mercenary with which to fight. These preset classes are a good introduction to the rich world of Mordhau builds, and you’ll soon work out whether you prefer offensive or defensive play, or if you have a penchant for keeping your distance as an Engineer or archery type.

Once you’ve got a feel for the horrors of medieval war – armed with our top Mordhau tips, of course – you’ll want to experiment with custom loadouts, and Mordhau offers a deep system with which to do so. With a limited number of points you can choose from a range of weapons, armour, and perks, which holds the possibility for a dizzying number of different combinations. So let’s get started: here are the best Mordau builds that’ll put your foes to the sword in Triternion’s nightmarish battlefield.

How to create Mordhau builds

The key thing to bear in mind when crafting bespoke Mordhau builds is that once you’ve made your knight in shining armour look as fancy as possible, you’re restricted to 16 perk points. These points are used up by the perks, armour, and weapons available, although some are unlocked with gold or only accessible at a certain character level. A smattering, however, are already available at the beginning, so you can get creative right away. In the case of weapons and armour, the number of points used up is on the left of the item’s name and the level needed to be reached is on the right.

Weapons and perks cost different amounts of points, too. For instance, the Dagger and the Short Sword cost one point each, whereas larger death-doers like the Longbow will set you back 11. For the latter, that only leaves you with five points to spare on your armour and perks, so make sure to pick carefully by building your character around a certain skill or weapon. For instance, if you choose Bloodlust to restore yourself to full health after killing an enemy through melee moves, don’t equip a bow.

The best Mordhau builds are: 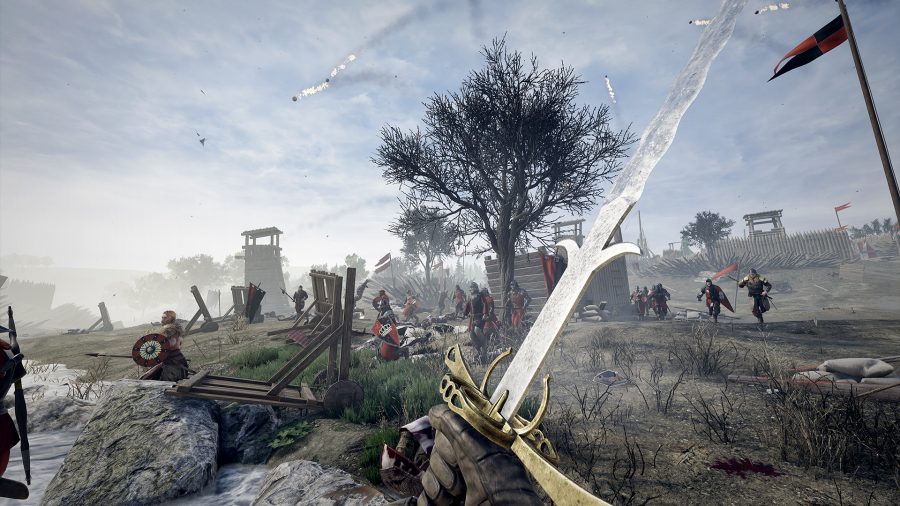 Speaking of Bloodlust (5), this is an incredibly useful perk. Its five-point cost makes it the dearest, but it’s worth it. Since you gain all your health back on a successful melee kill, this is an ability that rewards you for taking the fight to your opposition on the front line.

Elsewhere in this Vampire build created by The Real Fran, he goes with an armour set up that costs 2, 3, and 2 perks points for his helmet, torso, and leg protection, respectively, with the Rapier (4) as his primary weapon. The relatively-quick attack speed of this light weapon makes it great for getting in and out of fights with some quick stabs. Keeping an eye out for injured enemies is worthwhile here, too, but make sure you don’t mistake them for a friendly.

This Mordhau build from Gatling Gigz is all about speed and agility, but without sacrificing its defensive capabilities. Each perk for this build focuses on boosting his soldier’s flanking potential: Acrobat (1) reduces stamina cost from jumping by half, Tenacious (1) restores health 66% faster, and Dodge (4) allows for you to initiate an evade by jumping backwards or sideways. This type of character works less well in tight spaces, but you’ll be a murderous blur when you’re facing a rival down one-on-one with space to shift around.

Naturally, light armour complements this setup well. Gigz goes for the Worker’s Hood (1) and a Leather Lamellar Cuirass (1), but other lightweight threads like this work well, too. But, to make sure he’s not too vulnerable he goes for a Kite Shield (3) to go with his Short Spear (4). This custom class is all about mobility, so avoid getting bogged down in staid face-to-face exchanges. 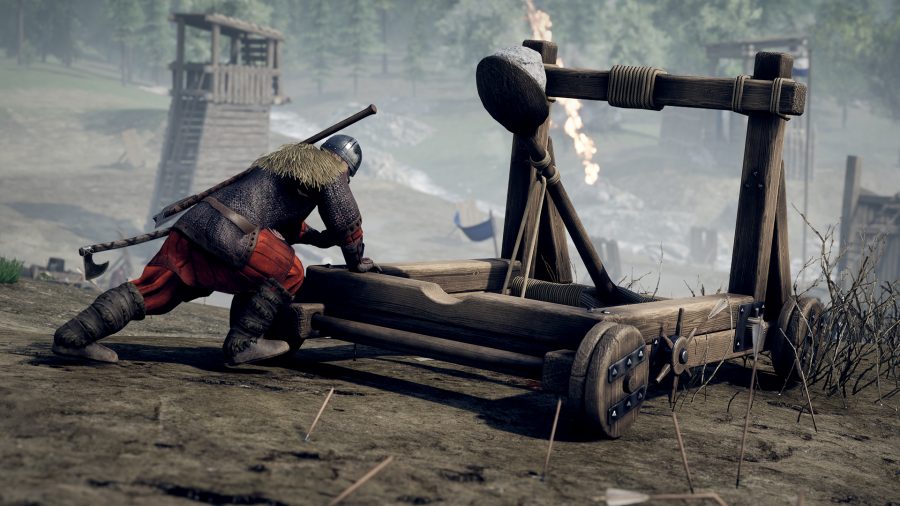 The stock Engineer class is a strong pick, but there are a few ways to improve this role. Of course, the Smith (1) power that increases the efficiency of repairs by 50% is an essential pick, as is the Toolbox (8) – found in the Two Handed weapons section. But you’ll also want to maximise mobility by donning light armour for a small amount of protection, or simple cloth to allow for maximum footspeed.

However, having the capability to repair and build crucial battlefield installations is useless if you can’t get to where you need to go. That means the Rat (2) perk is a strong pick, as it lets you move 10% faster and reduce movement sound by 75%. This, plus the Cat (1) ability that reduces fall damage by 50%, is a great way to crack on with your work quickly, quietly, and untroubled by enemy assailants. 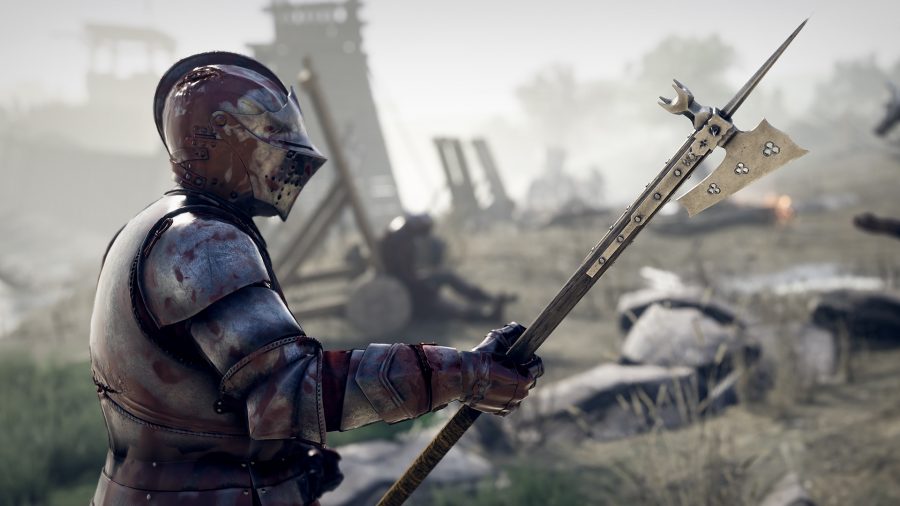 Mass brawls are commonplace in Mordhau’s 64-player skirmishes, and you need someone on the frontline that can take the heat of multiple aggressors while the more nimble damage dealers can flank. This thankless task goes to this Tank-focused Mordhau build. Start by wrapping yourself in as much protection as possible, so stick to heavy armour – your job doesn’t need you to move freely as others.

Supplement your medieval punching bag with the Tenacious (1) perk and reduce fire damage by 80% with Fireproof (1). Then, spend the remainder of your points on a hefty shield for maximum protection. You’re not going to find yourself amid the top fraggers of Mordhau’s kill count leaderboard at the end of the battle, but you’re an important member of your army, nonetheless. 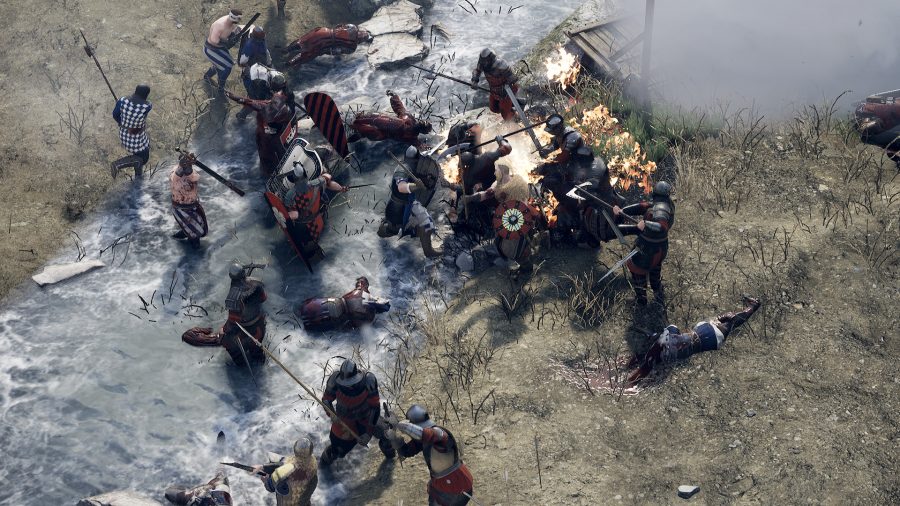 Here’s something everybody besides Engineers and support players will not expect us to say: with this Mordhau loot build, don’t equip any weapon at all. The key to this loadout is to deal some quick damage, be as nimble as possible, and grab yourself as much loot as you can to turn the tide of battle in your favour. So, before anything else, equip the Scavenger (1) perk, which forces enemies you’ve killed to drop everything they’re carrying.

Next, to ensure you’re as nippy as you can be, bolster your character with the Dodge (4) perk, and consider giving yourself some extra durability with Second Wind (2) which lets you gain stamina when you hit – you need to get that energy back somehow.

Stop yourself from dealing too much damage to your own side with Friendly (1) and barrage choke points with a Fire Bombs (1) and Throwing Knives (2). Use your remaining points on medium armour, but nothing too heavy that restricts your movement.

What’s it good for? Put your life on the line in these war games

And there you are, a decent selection of Mordhau builds to get you started in the gory world of custom medieval soldiering. If you’ve got the taste for the last man standing experience you can enjoy in one of Mordhau’s modes, try to be the last player alive in these other excellent battle royale games. And, while you find yourself lost for hours in Mordhau’s pleasingly layered customisation menus, don’t forget to actually fight someone now and again.