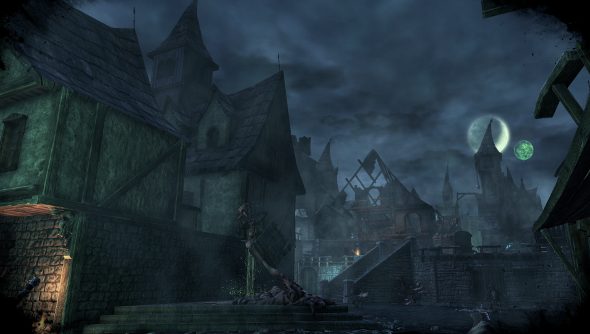 After a short break, Playing With Myself returns! This week, I got to hang out with my smelly Skaven buddies in Mordheim: City of the Damned, a video game adaptation of the Warhammer spin-off. The fantasy one, not 40K. Space Marines are out, knights, rats and ghouls are in. It landed on Steam Early Access a week ago, and it was very hard for me to restrain myself and not play it before recording. I did check out the tutorials, but I think I can allow myself that.

It’s a tactics game with a mountain of potential, but at this early stage it’s missing a lot of the big, important features like managing warbands and character persistency. Right now, it’s all about scrapping away in skirmishes. That’s still a lot of fun though. Take gander at the video below, and then read on for my impressions.

The city of Mordheim is royally messed up. It’s a plague-ridden place infested with soldiers, all fighting each other over this eerie medieval town. Those soldiers, at this Early Access stage, are human mercenaries and the smelly, wonderful Skaven, but demon worshiping cults and what have you will eventually make their way into the game.

It wears its tabletop roots on its sleeve, using principles like initiative, zones of control and skill checks in turn-based action. The way this is presented, though, is not a million miles away from Valkyria Chronicles.

You get direct control of a unit on its turn, moving it with the WSAD keys. Where Valkyria Chronicles has a bar that depletes while you move, troops in Mordheim have personal zones that they can move in freely. So one strategic point is spent to move, but once that’s spent a character can move anywhere within it without spending more. Once they move across the line that marks the zone’s border, another is spent. 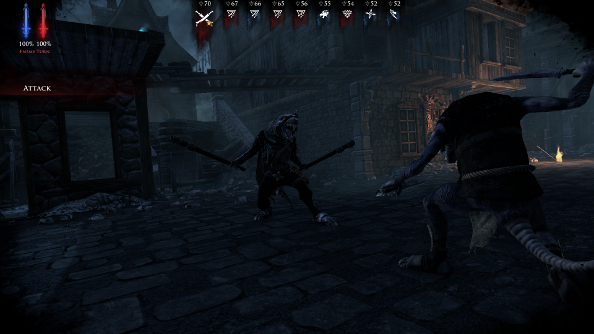 These points can also be spent on other actions, like clambering up walls, jumping from ledges, or using stances to prepare for enemy attacks, like dodge stance or parry stance. Selecting an action doesn’t guarantee its success, though. Every action that isn’t simple movement has a success chance, and it really comes down to luck, like the roll of a dice. Fail a climb roll, and your precious little unit will fall on its backside and lose a chunk of health. My poor Skaven warriors were the victims of several unfortunate falls.

Offensive points are bit more self-explanatory. You spend them to hit things, shoot things and otherwise hurt your nasty, clearly deserving enemies. There are basic attack orders, and some units get special attacks that do extra damage or increase the chance of a critical hit. There are offensive stances, too, like ambush, which are like the dodge and parry stances but, you know, you can hit stuff.

I’m currently in the middle of two separate tabletop roleplaying campaigns, a D&D 5th Edition that I’m running, and a friend’s home grown campaign based on the Call of Cthulhu rules, and the similarities between tabletop shenanigans and Mordheim made me feel very much at home. There’s even a perception ability, where a strategic point is spent on searching for foul traps peppered throughout the area. 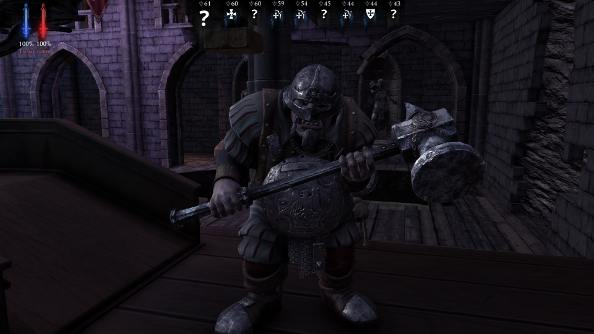 Mordheim isn’t based on D&D or Call of Cthulhu though, it’s based on Warhammer, a franchise I still adore even though I haven’t had the time to obsess over it in nearly a decade. The stories of Warhammer all come from battle, it’s a wargame, and from an attachment to units that you actually created; hideous, charismatic beasties that you glued together and painstakingly painted.

Already, even at this early stage, developer Rogue Factor have captured some of that personality. My furry rodent warband is an animated bunch, and appropriately disgusting. I mean, you can almost imagine just how bad they smell. And the city of Mordheim itself is a decrepit, perpetually gloomy place with the marks of corruption subtly applied through unnatural growths punctuating the alleys and sewers.

But it’s missing a lot, which is understandable given that it’s not a finished game. Unfortunately, that missing substance is really where I reckon where Mordheim’s charms will eventually be found. The warbands you’ll use are not your own, they are given to you by the game, and they’ll never develop. Win or lose, there are no stakes, because these are all self-contained skirmishes, not campaigns with permadeath and personalised warbands. 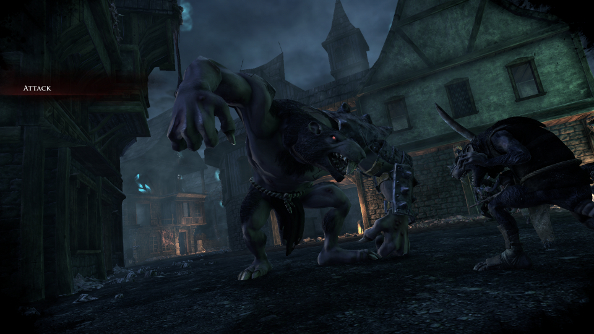 There are enough maps to entertain for a few hours, each able to be played at day or night, and they can be fought in online against other humans (one would presume that rat men don’t yet have internet connections) or offline against the AI, but it feels like a demo. A meaty demo, sure, but still just a taste of what the full game will offer. Eventually.

If online multiplayer is your cup of rat coffee – I don’t think they are tea drinkers – then you should wait for some updates. Right now the online skirmishes are spotty at best, and that’s when you can find one running.

None of this has diminished my excitement. The tactical combat is, once you decipher the UI, simple to pick up, but contains enough complexity, enough depth, so that decisions made in these elaborate maps are interesting. Do you risk injury and wasted resources to climb up a wall and meet a foe on this turn, or do you play it safe, taking the long way round and then laying an ambush. Do you shoot a foe, knowing you’ll probably kill him, or do you spend your offensive points on buffing allies instead?

Mordheim: City of the Damned oozes promise out of every pustule, and I’m very much looking forward to watching it develop.