Not completely satisfied by the Mortal Kombat 11 endings you’ve experienced so far? Not to worry, there are a total of three endings to the main campaign of Mortal Kombat 11: a best ending, a good ending, and a very bad ending. In addition to those, there are also character endings, which are little hypothetical vignettes for each character that show what they would do in the ending scenario.

The Mortal Kombat 11 endings may have some very serious ramifications for the future of the series, but there actually isn’t a huge amount of variation between the two good endings. However, if you’ve kept up to date with all the Mortal Kombat games and their stories then you’ll definitely want to grab the best MK11 ending.

Obviously, there are a lot of Mortal Kombat 11 story spoilers, so if you want to experience the whole game unspoiled then click away immediately. You have been warned. If you’re like us though, and want a quick recap after the dust has settled – or to see what endings you’ve missed out on – then the ending explanations below will do just that.

The ending sees big bad antagonist Kronika ordering the revenant form of Lui Kang to attack Raiden, but Raiden melds with revenant Lui Kang, creating Fire God Lui Kang. Together with Kung Lao and Kitana, Fire God Lui Kang breaches Kronika’s Keep, however Kronika uses the sands of time to restore history, ejecting Kung Lao and Kitana from the final showdown. This is the portion of the battle that remains the same, but the ending you get depends on your performance in the last boss.

To get the best Mortal Kombat 11 ending you need to have a flawless final fight against Kronkia, which simply means don’t lose a single round. In this ending Fire Lord Lui Kang becomes a god and can control the sands of time, Raiden becomes a mortal, and Lord Lui Kang shares the duty of shaping a new era with Kitana by his side. It’s quite sweet, honest.

This opens up a lot of possibilities for where Mortal Kombat 12 may take players, with the suggestion being that Lord Lui Kang and Kitana will shape a peaceful new era. Of course that wouldn’t be very Mortal Kombat now, would it? That’s why Kitana is quick to warn that whatever the new era is like, they cannot control how mortals will act. The ending leaves the door wide open for the series and ties up a lot of loose ends.

To activate the other good ending all you have to do is lose the round in the prehistoric stage (the one with the annoying Tyrannosaurus rex) and win the round in space. This ending is very similar to the best ending, however, instead of Lord Lui Kang partnering up with Kitana to shape the new era, you end up with Raiden joining you throughout the eons. Not as romantic, but a decent ending no less.

It’s one thing for the baddies to triumph at the end of the game, but it’s really rubbing salt in the wounds when the bad guys behead your hero. To get this ending you just need to lose in both stages of the fight. Instead slaying Kronika, she’ll decapitate you and her new era will commence. You’ll get a retry screen though, so it’s safe to say this isn’t the intended ending. Still, it’s nice to get a glimpse of the evil side winning. 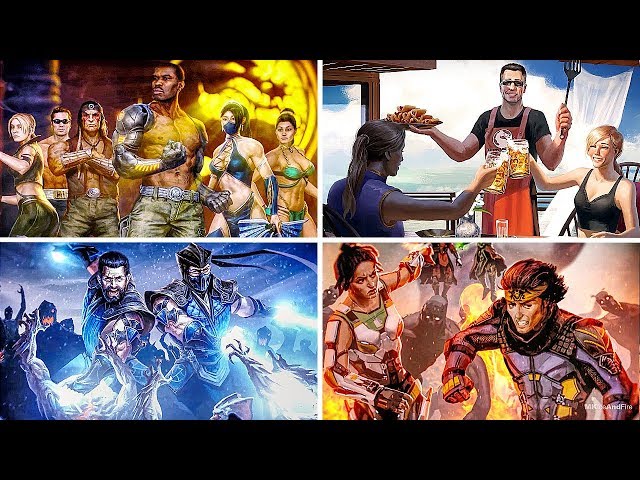 In addition to the three main story endings there is also a character ending for every member of the roster. These are very self-explanatory, so we won’t explain them. To unlock these you simply have to complete any difficulty Klassic Tower with your favourite character, which will unlock it for you to view in your Kollection. The video above has all of the Mortal Kombat 11 character endings for your viewing pleasure.

Read more: Here’s how to perform all Mortal Kombat 11 fatalities

And there you have it. Every MK11 ending explained, as well as all character endings in case you didn’t want to defeat Kronika as every character in the roster.