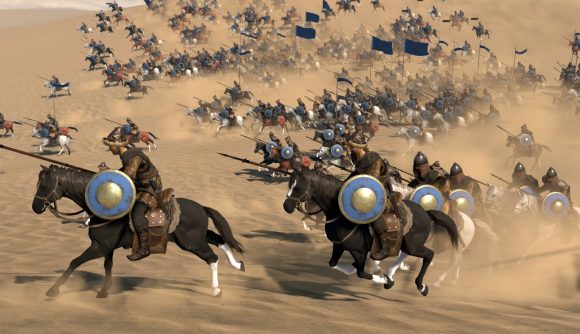 Mount & Blade 2: Bannerlord’s Steam Early Access launch has been brought forward, developer TaleWorlds Entertainment has just announced in a press release. While only moved by a single day,  the new release date means fans eagerly awaiting the action RPG game’s debut can sink their teeth into it a day earlier than expected. It’s now due to drop March 30.

In the announcement, TaleWorlds reveals Mount & Blade 2: Bannerlord – a prequel to the standalone Mount & Blade expansion Warband – will be available to play in Early Access from 03:00 PT / 06:00 ET / 11:00 BST on March 30. The dev team “has been working hard these last weeks to keep the development process on track, even under the present circumstances that forced the team to switch to remote work two weeks ago”, the release explains.

“Thanks to the great effort of the whole team, and hearing the requests of our community to release the game as soon as possible, Mount & Blade II: Bannerlord will release in Early Access a day before.”

The good news is the game will also be discounted by 10% during the first two weeks following launch, the studio reveals, while “those who already own a copy of any Mount & Blade title will be eligible for an additional 10% discount on select partners.”

Warriors of Calradia! Here you have some details of the Early Access release of @Mount_and_Blade II: Bannerlord… which will happen a day earlier, on MARCH 30th!https://t.co/7S3BoVqJKL

The studio has just published a new blog post (which you can read here) detailing Early Access information, including what you can expect to come with the launch in-game.

The studio also discusses reasons behind its decision to bring the release forward, explaining that, while the outbreak of the COVID-19 virus around the world has presented “its own challenges, of course, […] we are still very grateful and lucky to work in an industry where it is possible to work remotely, which we know isn’t the case for many of you.”