You’ll soon be able to enter Mount and Blade 2: Bannerlord’s battlefields as your favourite Lord of the Rings heroes and villains, thanks to an upcoming overhaul mod called Kingdoms of Arda. The mod will transform Bannerlord’s campaign with new quests, companions, and new locations such as a Middle Earth map. Alongside this, an additional story mode will let you play out iconic battles from Tolkien’s history, switching heroes and units in a game mode inspired by Battlefront-like Lord of The Rings: Conquest.

As modder Macbeth of Gondor explains, Kingdoms of Arda has been in the conceptual stage for years now, but the recent addition of official modding tools to Bannerlord has brought many of their ideas that much closer to becoming reality.

The Kingdoms of Arda team mentioned in a recent ModDB update that they “had the pleasure of being included in the testing phase of mod tools,” and “worked with Taleworlds to test and learn the tools”. The new tools mean the team can start work on the campaign, coding factions, settlements, troops, and much more.

You can check out a gallery of images – from Gondorian footmen to Aragorn – below: 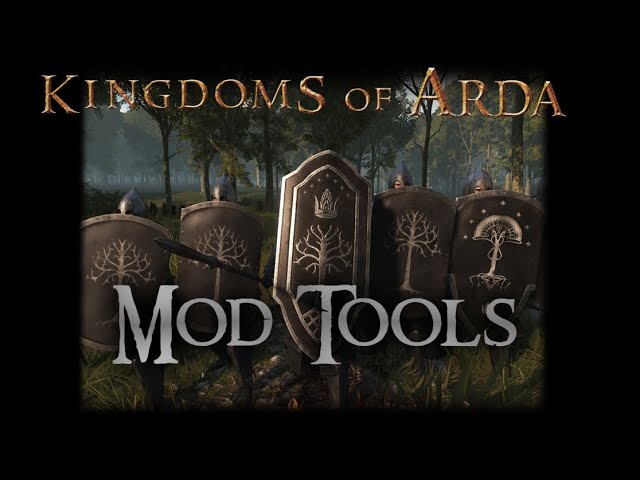 The Kingdoms of Arda team are keen to emphasise that the project is still a fair way off from completion. It’s an extremely ambitious package, though, so this is to be expected.

Alongside the campaign, multiplayer, and story modes, planned features so far include more than 35 factions, eight playable races, and massive creatures including Ents, Trolls, and mammoth-like Mumakil. This is alongside new music and audio, new troop trees and mercenaries, and new weapons, armour, and mounts. We need to sit down for some salted pork and pipe-weed after just writing all that, so the team clearly has a lot on their plate.

Currently, the team is waiting “until the mod reaches a point of high polish in our first set of factions: Gondor, Rohan, Isengard, Mordor, Harad, and Dunland” before planning any sort of release. “This means that the campaign needs to reach a satisfying smoothness and balance.”

We’re especially excited about the mention of “new siege equipment”, too. There are few things in Bannerlord more fun than hanging around on a castle wall at the corner of a siege tower and sneakily poking the eyes out of attacking troops with a spear, and Lord of the Rings is known for its epic sieges, so this sounds like a match made in Valinor.

The Kingdoms of Arda team aren’t just sticking to the film trilogies, either. They’ve expressed interest in covering other periods from the history of Tolkien’s Third Age, including some experiments with ‘What if?’ scenarios. You can find more information on Macbeth of Gondor’s YouTube channel, where the modder has uploaded a series of videos outlining plans and progress.

If you can’t wait to march the Ents all over your enemies’ stupid faces, and want more Bannerlord chaos in the meantime, why not check out our guide to Mount and Blade: Bannerlord 2 cheats? No eagles as yet, though.