Anime games are a dime a dozen, but it’s a relatively new trend to see gaming hardware companies debut collections based on popular franchises. It looks as though MSI could be next in line, however, as one of its gaming monitors gets a Neon Genesis Evangelion makeover in new concept art.

Norweigian creator Øyvind Engevik, otherwise known as Engwind, has adorned the MSI Optix MAG274QRF-QD display with the iconic purple, green, and yellow colours of Unit-01 – you know, the robot Shinji needs to get into – giving it the same futuristic look as the show.

It’s not clear whether this is a personal project or something made on behalf of the company, as the render was posted on Engevik’s Behance gallery. He has worked with the brand in the past, though, and this could be MSI’s answer to Asus partnering with Sunrise Productions to bring us a shed load of Gundam-themed gaming hardware last year. We’ve reached out to find out more, but don’t get your hopes up until things are confirmed – even official renders sometimes don’t make it to production.

Should the concept see the light of day, the MSI Optix MAG274QRF-QD would automatically be the best gaming monitor for Eva fans everywhere, with 1440p resolution, a high 165Hz refresh rate, and an IPS panel for rich colours. And where there’s smoke, there’s fire, as more gaming peripherals would be sure to follow. Just imagine filling the best gaming desk with them. 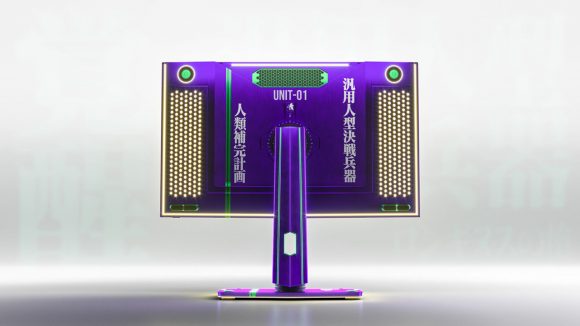 So, what’s the likelihood of this becoming a reality? Well, Team Liquid recently released merch based on Naruto Shippuden and looks like it’s even gearing up for an Attack on Titan collaboration, so anime and gaming go hand in hand right now. And if Steelseries can partner with videogame publishers on limited edition mouse pads and headsets, why shouldn’t MSI launch a range of Neon Genesis Evangelion gear?