Right now your options for delving into the immersive realm of virtual reality rests between the woefully inadequate and the crazily expensive. But what if there was an alternative middle ground? That’s where British startup, MVR, are aiming their Ascend H1 headset.

Whatever the VR gaming experience you’re going for make sure you’ve got the best graphics card for your budget.

With a Kickstarter project having kicked and started at Midnight today, MVR are looking for the final capital push to get the manufacturing of their VR headset off the ground with a view to ship internationally around July 2017. We had an opportunity to play around with a pre-production prototype of the £199 Ascend H1 headset to see just what sort of experience the VR middle ground can offer.

Despite a slow start to this latest VR generation industry analysts are still expecting a growth explosion over the next few years with it going fully mainstream by 2020. But still the overwhelming majority of VR devices strapped to the heads of humanity are of the low-rent sort like Google Cardboard, not the high-end Rift or Vive type goggles.

The main reasons for that are twofold: content and cost. Content is still a key issue with few must-play games emerging for any VR platform yet, but by far the biggest barrier to the top-end experiences is the cost involved in purchasing both the headset and the machine to run it on. Both of these problems are the focal point for MVR’s new headset solution.

The MVR Ascend H1 is designed to work across multiple platforms and allows you to play pretty much every first person game out there through their goggles. That versatility is immensely ambitious and makes it the first VR headset to be simultaneously compatible with Google’s simple VR goodness as well as both major consoles and with the PC too. And all wirelessly too. 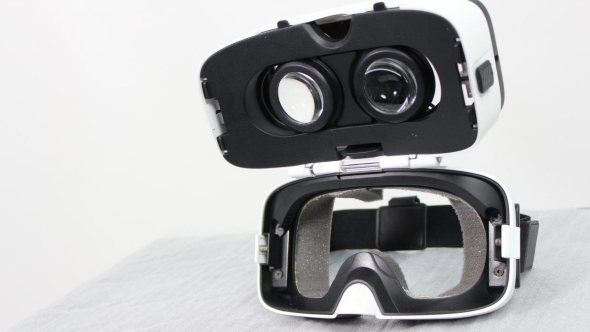 Wait, what fresh voodoo is this? MVR have opted for the smartphone model – used by Samsung’s GearVR and Google Cardboard – to allow you to jam your Android phone into the headset to use as the screen. The trick is that none of the processing is actually done on the tiny mobile processor inside your phone – MVR are taking advantage of the latest game streaming tech to get your games from your PC and console into your VR-ready eyeballs.

On the PlayStation 4 they use Sony’s own Remote Play application, the Xbox One can stream out to a Windows 10 device and Nvidia’s Gamestream will fire pixels over the air from your powerful desktop PC to any Android device you have on your network.

That does though mean there are some major caveats to the MVR Ascend 1’s versatility. Sony’s Remote Play app is only officially compatible with Xperia phones, so you need to get a modded version of that to work on any other phone, and Microsoft hates its own handsets so you can’t even stream an Xbox One game to a Windows 10 phone. An Xbox-compatible version of the MVR headset will come (once the negotiations with Microsoft are concluded) which has a supported device/screen installed as a more permanent presence.

And then on our favourite platform, the PC, you have to have an Nvidia graphics card installed to be able to use the Moonlight streaming app MVR recommend for their device. AMD owners need not apply. And, from my experience of wireless game streaming, you’re going to need a decent 5GHz-capable router to be able to get a reasonably smooth and consistent experience.

But, Xbox One compatible version aside, using a phone as the screen massively cuts the cost of the Ascend H1 headset, making it that middle ground between the Vauxhalls and Fords of Google Cardboard and the Porsches and Ferraris of the Rift-y, Vive-y VR world.

There are a host of packages for the Kickstarter campaign, with a limited number of the Super Early Bird Package giving you the £199 PC/Playstation version for just £129, a secondary tier for £159 and a standard tier at £179. The Xbox One compatible tiers are more expensive because of that additional screen. 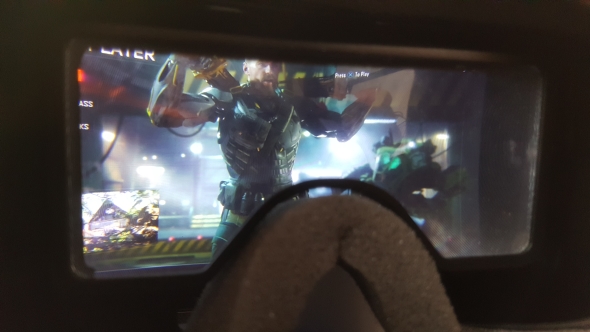 So, if it doesn’t have a screen or any actual processing in the headset itself, what does the standard Ascend H1 actually do? The goggles contain the optics necessary to make the smartphone screen seem more, y’know, VR, with both 3D and 2D versions hot-swappable inside. You can either use the 2D fresnel lens to play non-VR specific games in the headset, or a more familiar 3D optical setup, with separate lens for each eye, providing adjustments not only for focal, but pupillary distance too.

At the moment the 3D version is only available on the PC (premium platform, innit) where our games are capable of splitting the image into two – one for each eyeball.

On the elastic headband are a pair of earcups for integrated audio – so you don’t have to untangle a mess of different wires when you want to extricate yourself from your chosen VR world – and at the back is the sensor. This is the real heart of the device; it’s a small capsule on the rear of the band with an L-shaped PCB with a gyroscope and accelerometer attached. 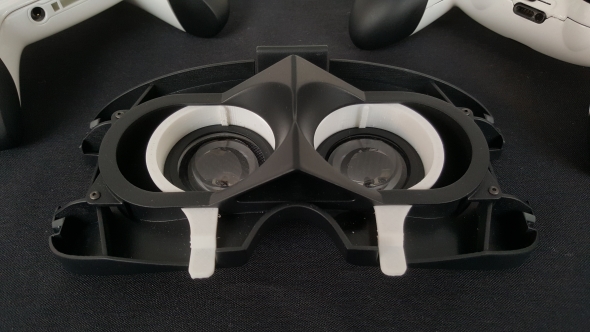 At the moment the sensor is attached to a little box and then to the controllers which come with the Ascend H1. They’re very obviously modelled on the latest Dual Shock and Microsoft controllers, but wired into the headset not the source device. The little box which sits between controller and sensor houses the different game profiles which translates the sensor inputs to whichever control is used for head movement in-game.

The final version of the Ascend H1 will eliminate the need for the profile box as it will be integrated into the rear of the controllers, with an LED readout and switches to allow you to cycle between different game profiles or your own custom loadouts.

The 2D lens and this sensor/profile combo is what allows the MVR headset to be compatible with non-VR first-person games. The sensor essentially transposes your head movement – generally speaking – into the right-thumbstick input of a normal controller. 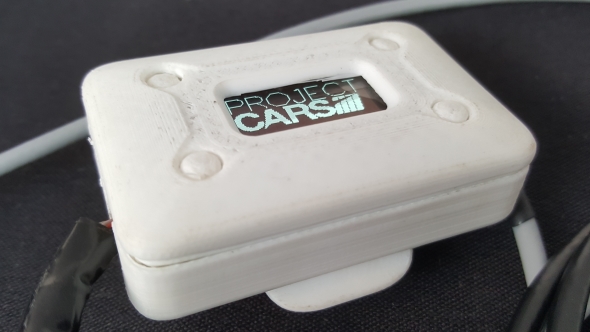 This allows it to be versatile – probably the Ascend H1’s biggest strength – but is also one of the reasons it feels a little disconnected rather than as fully immersive as something like the Rift, Vive or even PSVR. Because it’s translating the free movement of your head into the more regimented motion of an analogue thumbstick it feels a lot more stilted in-game.

But the MVR Ascend H1 isn’t designed as a headset to take on the big boys of VR, more as a device that will allow you to trial a VR experience without having to fork out the big bucks on both a headset and super-powerful gaming PC.

Therein though lies the danger a weaker initial experience could put out the fires of your VR desires, tainting your faith in the tech and putting you off entirely. After my short experience with MVR’s prototype headset I worry that could be the case here, certainly for some PC users. Streaming games always adds in a certain amount of extra lag and that is the bane of virtual reality immersion. And the cause for a lot of motion sickness too.

With Playstation Remote Play the lag wasn’t too noticeable when running around Call of Duty: Black Ops 3 in the Ascend H1, but MVR does admit the experience via Nvidia’s Gamestream technology is a touch more laggy. That tallies with my own experience where seriously twitch-based games struggle to allow for the reaction times such titles thrive on.

When you’re trying to send both control inputs and video outputs wirelessly between different devices you’re always going to be adding some lag into the equation and for certain games that is a real barrier to playing them over a stream, no matter how powerful your base machine is. The Moonlight app MVR is recommending for their PC compatibility is robust enough to allow for a solid 60fps at 1080p over the stream, but neither that or Nvidia’s own Gamestream app are able to magic away the lag. 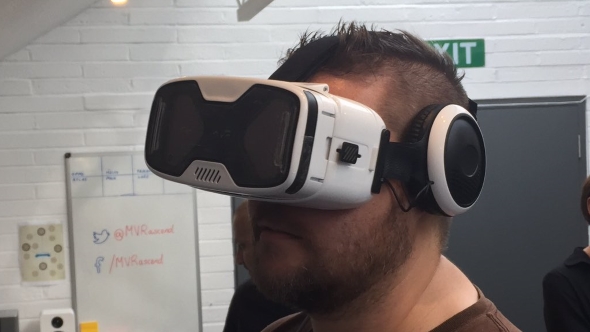 That’s going to be an issue for fast-paced games where reaction times really matter and free-roaming titles where you need that consistent freedom of motion to maintain a level of immersion. Where the Ascend H1 does have a place though would be in the cockpit-based world of flight-sims, space-sims and racers. Project CARS delivers a decent experience over Nvidia’s streaming tech, smoothing over the extra lag, and titles like Elite: Dangerous will also benefit massively from both the head-tracking and for sucking you into the sprawling galaxy.

And because of the flip-up front it’s a lot easier to give your eyes a break when you’ve been barrel-rolling through an asteroid field and you need to reach for the sick bag. I ain’t no fighter pilot, I still get queasy.

The MVR Ascend H1 is never going to be able to deliver the sort of experience you get from the Rift and the Vive, but with its versatility and relatively low-price it could well be a good entry-point for cockpit-based virtual reality. Just don’t expect too much…

Check out the MVR Ascend H1 Kickstarter pageif you want to take a punt on some wireless VR without the cost of the Vive.