When making a simulator, be it a racer or a football game, a commitment to realism comes with no shortage of pressure. With the slightest bug or most infinitesimal of glitches, players immersed totally in their passion will be pulled out of the experience. If a vehicle’s handling is a touch too light or an AI opponent behaves oddly, the illusion can be shattered.

What is even more demanding is when your game is targeted at the most hardcore of audiences, players who live and breathe the experience that is being recreated. That is the challenge that faces Milestone and their ultra-realistic official Motocross tie-in, MXGP Pro.

Want more? Here are the best racing games on PC.

“This is the fourth instalment to the series and expectations are high,” R&D programmer Michele Caletti tells us. “Here we have to showcase some improvements based on feedback from fans of past editions of the game.” While Monster Energy Supercross – also from Milestone – was aimed at more casual players, MXGP Pro is resolutely for MX experts, and their demands are pushing the team hard.

Thankfully for Milestone, though, MXGP Pro benefits from the strongest and most accurate of mechanical foundations, typified by the game’s impressive customisation system – allowing players the chance to change and tweak every last facet of their bike, from parts to components and colour schemes. Even though it was already in fine form in 2017’s MXGP 3 – the first in the series to take advantage of Unreal Engine 4 – there were still improvements to be made.

For Caletti: “It was already the best and most wide customisation in a motorbike game. But, we have also improved the number of components available and streamlined how you can customise your bike.”

Steering through the air 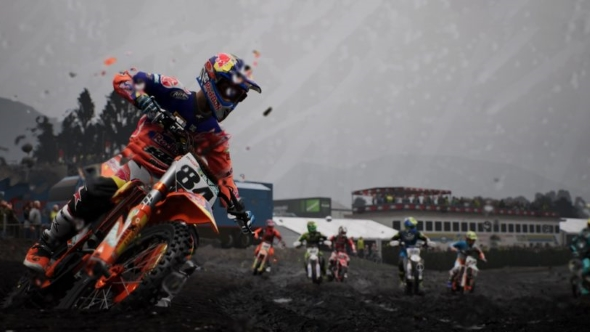 Returning players will reap the rewards if they take the time to experiment with the series’ customisation all over again. That is due to MXGP Pro’s flagship feature that promises to transform the core of the series’ gameplay, the ‘Pro Physics’ system. Based on fan feedback – including motocross superstar Anthony Cairoli – from MXGP 3, Pro Physics boasts realistic whips, ruts that affect how you tackle corners, and clutch control for explosive, extra quick starts.

While Unreal Engine 4 proved a boon for Milestone in developing MXGP 3, this new physics system leaves last year’s effort choking on its exhaust fumes. “MXGP 3 was our first attempt with the Unreal Engine and [Monster Energy] Supercross was already showcasing some physics enhancements, but we knew we had some room for improvement,” Caletti says. 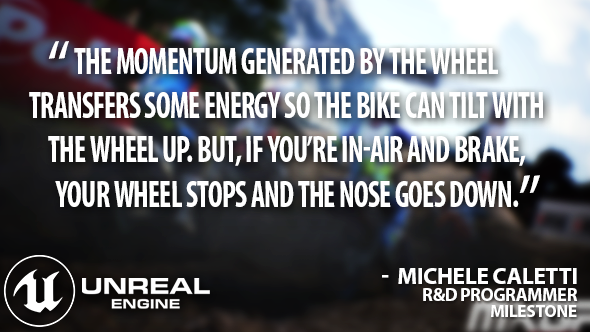 “Next comes MXGP Pro which is the ideal showcase for what we have developed so far. You have an immediate feeling of the bike in contact with the ground, which changes depending on the surface: for instance, if it’s raining it’s more muggy, and you immediately feel the difference.” This revolutionised physics compliments the game’s dynamic weather system to evoke an unmistakable change for returning riders.

Pro Physics also brings with it changes to how players manipulate their bike, both in-air and on the track. “One of the things motocross lovers know is that when the bike is in the air there is still room for control,” Caletti explains. “The momentum generated by the wheel transfers some energy so the bike can tilt with the wheel up. But, if you’re in-air and brake, your wheel stops and the nose goes down. It’s something that was not so detailed in MXGP 3.” Learning to manage your rider’s weight on the bike is what sets motocross apart from other types of racing, so the ability to improve the fidelity of this in MXGP Pro helps elevate the ambitious sim. 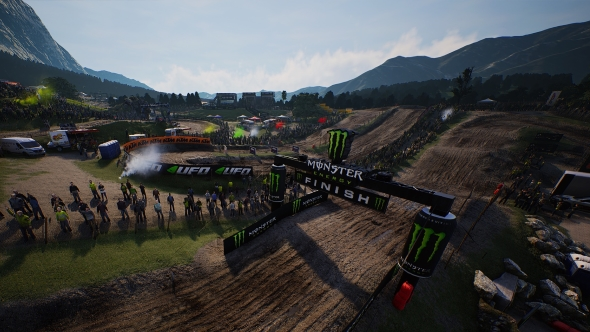 If MX fans have a new physics system and expanded customisation options, they’re going to need a bigger playground in which to play with them. The more expansive Compound is a freeform training ground in which you can experiment using various bike configurations with the different terrain conditions and weather system that changes in real time. With 30 challenges to take on, dirtbike devotees will lose countless hours fine-tuning their setup and getting to grips with the upgraded physics.

“[In Compound] you can roam freely and you’re in a very different setting to what you get in a normal motocross race,” Caletti says. “That gives you the chance to experiment, to be creative, and try something unique.” 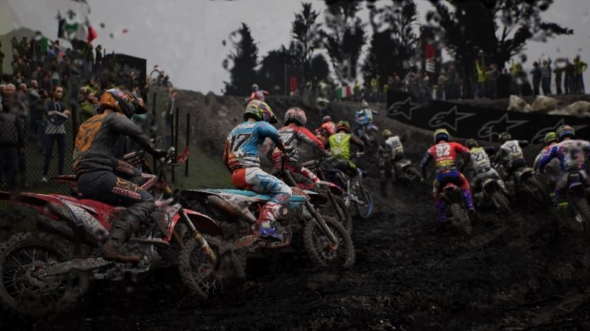 Beyond MXGP Pro’s release this summer, Milestone are already looking to the future of motocross simulation, and they will be getting to know their adopted engine even better to do it.

“There are always new tools added to the Unreal Engine that introduce new techniques that allow us to do things better and quicker, to iterate on what we do faster,” Caletti says.

Such tools were introduced over the course of MXGP Pro’s development, tools that proved crucial in crafting the seemingly minor details that maintain the illusion. One example are the dynamic rocks and puddles that ensure the experience isn’t a washout.

“We’re learning to do things in more clever ways. We have changed the way we create puddles so that they emerge when you’re riding in a very muddy place.” Caletti says the slope, weather system, and track – each drone-scanned for inch-perfect accuracy – combine to change the track’s surface as you are riding, which will impact your race and that of those in your wake.

From the headline-stealing upgrade that is the Pro Physics system to less noticeable changes and tweaks, all the updates Milestone are making are to push the boundaries of motocross simulation for the most dedicated of fans. With an ever stronger understanding of Unreal Engine 4, MX fans can look forward to an even more faithful recreation of their sport when MXGP Pro blasts and skids its way onto PC this summer.

MXGP Pro is out June 29 this year. Unreal Engine 4 is now free.

In this sponsored series, we’re looking at how game developers are taking advantage of Unreal Engine 4 to create a new generation of PC games. With thanks to Milestone S.r.l.