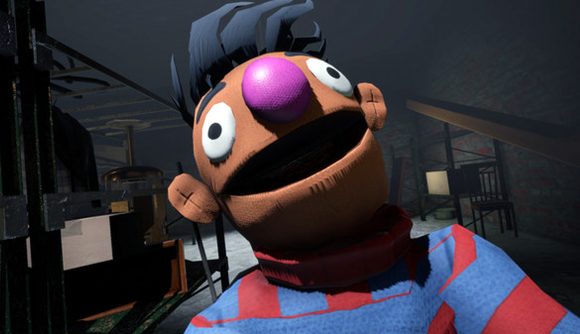 What would you do if you were stuck on Sesame Street and Elmo wanted to eat you? That’s the question posed by My Friendly Neighborhood, a new FPS that’s closer to Resident Evil: Village or Bioshock than Five Night’s At Freddy’s – could end up being one of the scariest horror games on PC.

The Realms Deep event from 3D Realms was held this weekend, and it featured many awesome game trailers and announcements – such as the much-rumoured remaster Powerslave Exhumed and John Romero’s next FPS project Sigil 2. However, one of the standouts was the reveal of a new horror game from publisher Dread XP and the developer behind the Pokémon-like EvoMorphs.

My Friendly Neighborhood is a survival horror set behind the scenes of an abandoned TV studio that used to run a Sesame Street-like show, but now the puppets have come to life and have developed a taste for human flesh. Shockingly enough, this isn’t officially endorsed by the Jim Henson Company.

The game itself is a non-linear FPS that seems heavily inspired by Resident Evil – with a similar map, puzzles to solve, and a grid-based inventory “cause that’s just way better”. The only weapon shown off so far is the Rolodexer, which is literally a Rolodex gun that fires letters of the alphabet at the killer puppets.

Ever wondered what your favorite children's puppet shows would look like from a. . . FRIENDLIER perspective? I would like to officially announce to you. . .

Survival horror meets puppets, made by yours truly. (Cont.)https://t.co/amOEO4zDzg pic.twitter.com/fixClldKlh

The game sounds both imaginative and highly terrifying, and while there is certainly a comparison to be made to the unstoppable Five Night’s At Freddy’s franchise in terms of theme, the gameplay itself sounds closer to a Bioshock or Resident Evil game.

My Friendly Neighborhood doesn’t yet have a release date, but we’re sure the unsettling image of Ernie trying to strangle me will linger until it does come out.