The new Need for Speed is a game about gunning it down neon-drenched, rain-slick streets as part of a gang of insufferable illegal street racers, like most Need for Speeds. It’s very fast, sometimes astonishingly pretty, and I get to drive a hideous purple car, which is all I really want in life.

On a racing binge? Check out our list of the best racing games on PC.

It’s out on PC on March 17th, four months after the console launch, so you probably want to know if the port is up to muster, and that’s why I’ve dumped my car in the garage and taken a break from racing: to answer this important question. 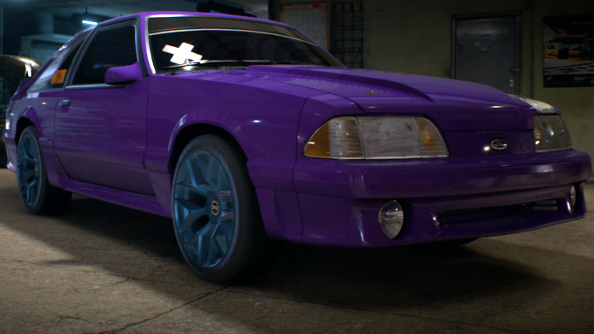 When you’re shooting down the motorway, nitros pushing you faster than Hermes, it’s easy to miss Need for Speed’s attention to detail – the way the street lamps play off the puddles on the road; the way rain leaves subtle streaks on your car’s gaudy body; just how striking the city looks when you’re peering down at it from on top of a mountain in the pre-dawn light.

Even on the lowest settings, Need For Speed’s lighting and vistas can be impressive, but unless you’re going to be playing it on an older rig, you’re probably not going to need to worry about turning everything down. 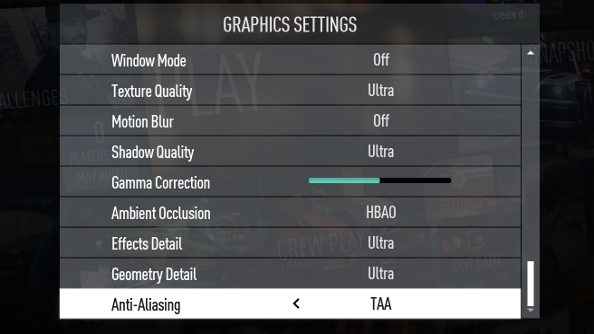 The graphics options are serviceable but limited. First off, there are no presets, though with only a few things to tweak, you won’t have to spend 20 minutes playing around with the settings. Texture quality, shadow quality, effects detail, geometry detail, ambient occlusion and anti-aliasing are the big things you can fiddle with. The first four have low, medium, high and ultra settings; ambient occlusion can be switched between SSAO and HBAO, while anti-aliasing is limited to FXAA and TXAA. The refresh rate can also be bumped all the way up to 144.

Unfortunately, you are expected to know what all these settings are, what they change, and how much of a performance difference will be created by changing them. There are no descriptions whatsoever. 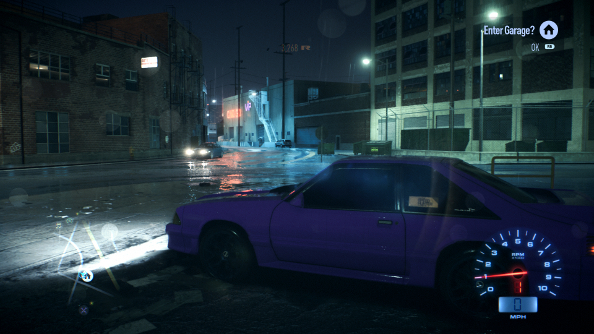 With everything cranked up, Need For Speed looks great, but I think TXAA is an acquired taste, making the image a bit too soft and blurry for some. It actually makes some of the effects, like the streaks of rain, a lot less obvious. The payoff is, of course, less jaggies, which is a plus.

On ultra, the frame rate fluctuates between the high 70s and 90s, which isn’t particularly noticeable, but I did experience some brief dips in performance where the game sank to 40 or 50 for a split second. These were very rare, however. 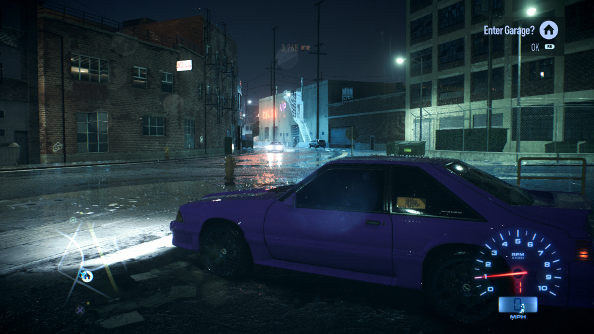 Lacking presets, for high I turned down the AA and ambient occlusion and reduced all the other settings to high. I think I actually prefer how it looks with FXAA, and the texture and shadow quality difference isn’t really extreme.

Performance wise, there is a big boost, with the frame rate ranging from the high 90s to 110. It mostly stuck to 100fps, though. It’s a significant improvement and the game doesn’t look worse off for it, either. 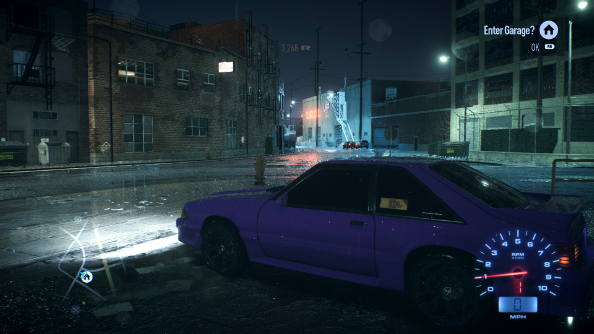 On medium, effects like rain and lighting are less prominent, but you’d still be hard pressed to tell the difference between this and the high settings.

There’s a performance improvement again, however, with the frame rate easily reaching 120 and very rarely going below 100. 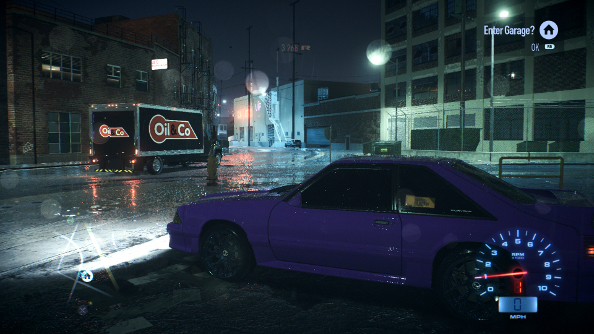 Last and least: low settings. Despite every setting being turned down to its absolute minimum, Need for the Speed can still look striking. The rain looks a little strange at times and the range of visual effects are toned down, but while you’re driving, the graphical downgrade is negligible.

Not much of a performance bump, here. The frame rate gets to 120+, but it’s the least dramatic change when compared to the other settings.

While you’re tweaking the graphics, you might also want to make a few changes to the HUD. It can get quite busy. Unfortunately, only the genuinely important things like the speedometer and the mini-map can be turned off, while annoying notifications persist, along with the ever-present reputation counter. At least the in-game screenshot feature has an option to entirely remove the HUD for pretty pictures.

I’m going to assume that you weren’t planning on driving using your keyboard, because you’re not mad, but if you are loopy, then it’s something you can do. You can remap the keys, as well, but don’t expect to be able to use your mouse for anything, even navigating the truly horrible menus that are laid out in a very counter-intuitive, form-over function style. Hopefully you were planning on using a gamepad or a wheel, and if that’s the case, then the good news is that both are entirely customisable as well. 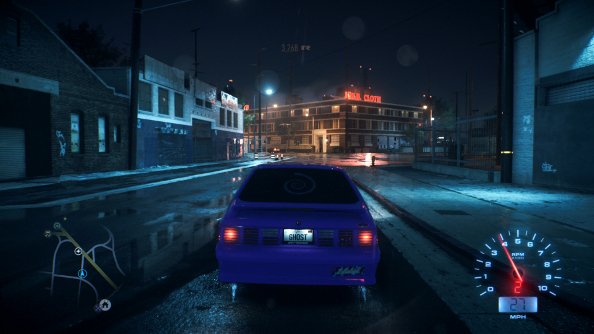 I went with a gamepad, since I blew my peripheral budget on a flight stick and couldn’t afford a wheel even if I wanted one. I only tweaked the controls a little, as the default settings felt comfortable – as did the driving itself. It’s fast, smooth and arcade-y, as you’d expect from a Need for Speed game.

Need for Speed is mostly an online dealio. There’s an option to play solo, but unless you select that, you’ll be mucking around in a world populated with other players. While only reviewers and the like are playing at the moment as it’s not out yet, nor is their cross-platform play, I didn’t have any issues finding people to race and harass as they went about their business. If you see another car driven by a player, you can arrange a variety of race modes with only a couple of buttons, and the race then begins immediately, without any faffing around.

The world itself does feel quite empty, though. There are very few vehicles making use of the many streets and motorways. It makes racing easier, certainly, and it makes other players stand out, too, but it’s still a very unusual sensation, to be driving through this mostly desolate city.

Need for Speed is a functional, serviceable port. The multiplayer component works perfectly, in stark comparison to the last racing game I gave the port review treatment, The Crew; no performance issues have cropped up, and it should run on a very wide variety of rigs; and it looks lovely. It might not have all the bells and whistles of a PC exclusive, but it still offers more than its console counterparts.