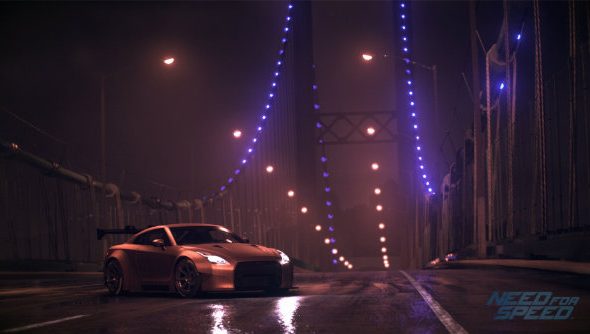 Update November 9, 2016: a recent trademark filing by EA may have revealed the name of the next Need For Speed game.

EA have filed a trademark application with the European Union Intellectual Property Office, for the name ‘Need For Speed Arena’, confirming what developer Ghost Games have said that we may be getting another instalment in the racing franchise as soon as next year.

For now, get your speed fix with our list of the best racing games on PC.

The trademark filing can be seen here. We already knew that developer Ghost Games were planning to deliver their “next game in 2017” and are “building upon the foundations” that they laid with 2015’s reboot (see below).

Need For Speed is traditionally an arcade racing franchise featuring police chases and less-than-realistic handling, as opposed to serious racers like Forza. It’s difficult to make any confident assumptions based on the ‘Arena’ label alone given the series’s prior form with its subtitles, but for exactly that reason, a more directly competitive multiplayer format certainly can’t be ruled out.

The aforementioned reboot saw the player competing in street races to win the attention of real-life icons in the scene, earning money as he or she did so. Here’s what we thought of it.

Original story May 10, 2016: The next entry in popular street racing series Need For Speed will release next year, in 2017.

In a post talking about their final plans for 2015’s Need For Speed reboot, Ghost Games revealed that they’re planning on wrapping up support for the racer so they can concentrate on the next game in the series.

Ghost Games talk about how they’ve learned from feedback on Need For Speed, with new features like manual transmission, wrap sharing, Snapshot Pro, SpeedLists, customisation items, bigger garage, drag racing and more added in free updates. Presumably these features will be there from the beginning for any future racer, then.

The upcoming SpeedList update, adding a series of five pre-selected events that you compete in against other human opponents, will be the last free content update.

Following this, the team will be mainly focusing on the next entry in the series. “We are now building upon the foundations that have been laid with Need for Speed and delivering our next game in 2017,” say Ghost Games in the official post.