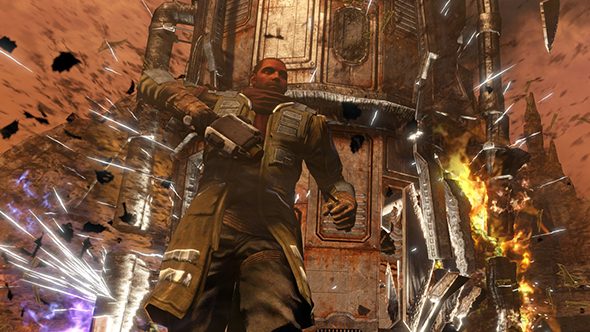 It looks like a new Red Faction game is on the way, and given the source of the rumour and the time of year, we’ll likely learn more at E3 if this is true. A Twitter user spotted a game called Red Faction Evolution listed on Nvidia’s site as one of the games supported by its Ansel screenshotting technology.

Said user posted a screenshot of their discovery, which you can check out below. PC Gamer confirmed that Red Faction Evolution was listed on the US version of the Ansel page, but it’s gone now according to one of our US writers and this screengrab he took. Weirdly, the UK version is missing a number of games from both the leaked and current US pages – perhaps someone at Nvidia US mistakenly set live an updated list of supported games, which has since been revised without Red Faction Evolution, and the UK version has yet to post its own update.

Nordic Games (now THQ Nordic) bought the rights to Red Faction as part of THQ’s post-bankruptcy IP auction in 2013, but its CEO has said that he wants to work with either the original creators of those IPs, or the “right developers”, before making any sequels. Red Faction’s creator was Volition, which was bought by Deep Silver, which was finally also acquired by THQ Nordic in February last year.

What I’m saying is, it’s only relatively recently that the IP and original Red Faction developer have been reunited under one roof. We got Red Faction Guerrilla Re-Mars-tered a few months after that happened, and THQ Nordic has said it currently – somehow – has 80 games in development.

In other words, conditions are ripe, there have already been signs of Red Faction activity, and with so many games underway, it’d be mad if one of THQ Nordic’s biggest current IPs weren’t among them. Everything is lining up neatly: expect a new Red Faction game to be revealed at E3.

Get blasting: check out the best FPS games on PC

The original Red Faction released in 2001, and was a sci-fi shooter in which you help lead a workers’ rebellion against an exploitative Martian mining company. Along with the revolutionary theme, it had a then-revolutionary technology: destructive environments were widespread and thoughtfully implemented in gameplay. The last full game we got was 2011’s Red Faction: Armageddon, which switched to a third-person perspective.