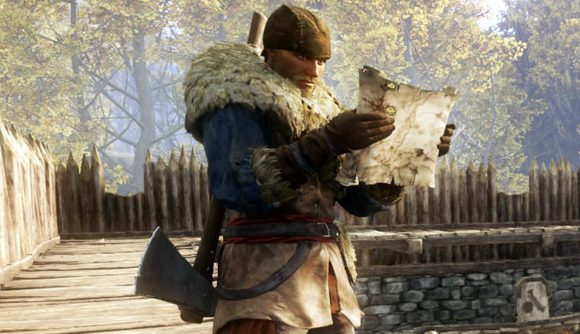 Players hoping to see a New World minimap like in all of the best MMOs on PC may be in for a long wait, as developer Amazon Game Studios says it’s “not a high priority”. The good news is that it’s not penalising players for using third-party mods – at least, not yet anyway.

When New World launched back in September it received good reviews from critics and players alike, but many were surprised by the reliance on the compass and the larger world map to track quests and other markers rather than the standard minimap used in most MMOs or open-world games.

In the latest developer blog posted earlier today, Amazon says that it “understands the reasons” players want a minimap but is concerned adding one will have “a negative effect on immersion” and that it has “concerns with it meshing with New World’s action combat style and world design”. The team is also worried a minimap “could change open-world behavior and potentially remove the natural exploration that happens now in the game.”

Going by all this, Amazon says that “creating a minimap is not a high priority” but will “continue to follow the conversation, gather more information, and will periodically re-evaluate our position.” Nevertheless, the team confirms it has “decided to not penalise” the Overwolf third-party minimap mod or anyone using it – although it may change that position in the future. The team says it “would give plenty of notice along with a designated grace period where would not ban players for continued use”, however – so if you want to use a minimap in New World, you won’t get banned for using Overwolf… yet.

Elsewhere in the blog post, the team says that cross-region server transfers may be coming to New World after all, despite previous statements saying they were “not possible”.