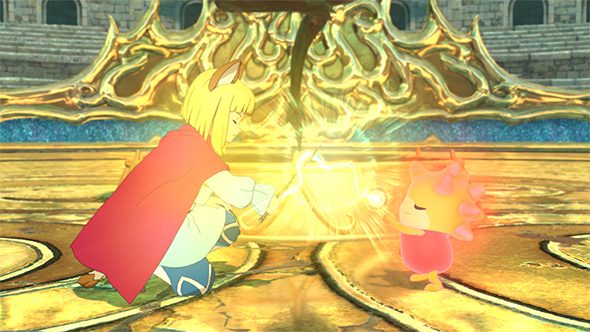 Update February 23, 2018: No more delays – Ni no Kuni II has gone gold ahead of its March release date.

Ni no Kuni II: Revenant Kingdom is out in exactly one month, and this time the Level-5 developed RPG will be releasing simultaneously on both PC and PlayStation 4. Publishers Bandai Namco announced the game has gone gold, and while “it’s ready for manufacture” might not have quite the same meaning on PC, consider this your PSA that the lovely JRPG’s March 23 release is coming up very soon.

There’s still a month until Ni no Kuni II arrives, so tide yourself over with some of the best RPGs out there.

Along with the announcement we’ve got a new video detailing the game’s kingdom building system. You play as Evan, a young king seeking to unite the world, and in addition to saving the world through your typical epic RPG story you’ll also be getting hands on to grow your nation. You can recruit new citizens from all over the world with their own talents and abilities, then set them to work in your kingdom’s facilities as you decide how to grow and expand.

Your expanded kingdom can develop new weapons and magic for you to use in battle, or provide you with the ships or airships you’ll need to progress in the story. It’s not quite the same as the systems that have cropped up in older RPGs, but character collecting and kingdom building are putting off enough Suikoden and ActRaiser vibes to make me very happy.

There’s also a bit of the game’s action-meets-RTS battles here, which we got a more in-depth look at a few months ago.

Ni no Kuni II: Revenant Kingdom is out March 23, and now it seems there’s little chance of this beautiful RPG seeing another delay.

Original story June 12, 2017:Ni no Kuni II: Revenant Kingdom, the sequel to the absolutely delightful Level-5 RPG that felt more like playing a Ghibli film than a game, finally has a release date.

The whimsical role-playing game will be headed to PC via Steam on November 10, 2017. We first caught wind of news of a Ni no Kuni sequel back at the end of 2015, so it’s been two long years leading up to this point, but now it’ll be time to dig into what will likely be a meaty new RPG once more.

Players will explore the kingdom of Ding Dong Dell and the tale of young king Evan as he is banished from the kingdom he grew up in. He sets off on a journey to build his own kingdom in return with the philanthropic goal of uniting the entire world along the way. Evan is an idealistic youth, to be sure.