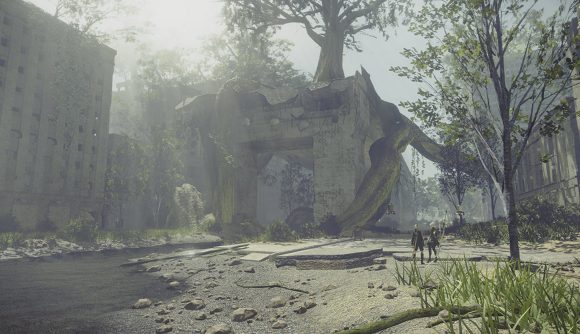 Nier: Automata arrived on Game Pass this week, and Steam users aren’t happy. The version of the RPG game on the subscription service is considerably better than what’s on Valve’s store, and players have started review-bombing it in protest.

The Steam port, released back in 2017, has always been notoriously poor, featuring UI problems, less than stellar controls, a locked framerate, and other issues. A mod, Fix Automata Resolution, was put together by fans to address a lot of these concerns, and in the absence of any substantial patches from Square Enix, it’s become the recommended way to play the beloved action-adventure game on PC.

The version that was put on Game Pass, and the Microsoft Store, is, for all intents and purposes, the one PC players have been clamoring for. Nier: Automata Become As Gods Edition, previously available on Xbox One and ported by QLOC, has a borderless window mode, runs smoother, and has upscaled textures. At time of writing, nearly 300 negative Steam reviews have been logged over the last three days, many following a specific theme. “There’s no reason this version shouldn’t have been updated to match the Game Pass version,” writes one. “Thank you Square Enix for releasing a patched version of the game on Game Pass and NOT updating this one,” says another, and on, and on.

This isn’t the only Game Pass release with a noticeable disparity, either. The Evil Within landed on the service with new FOV options, a first-person mode, and more, without any of these additions being added to the Steam version of the horror game.

Here’s a release trailer from when the Become As Gods edition first came out on Xbox One in 2018:

We reached out to Square Enix for comment, but a representative told us it didn’t have a comment or statement to make at this time.