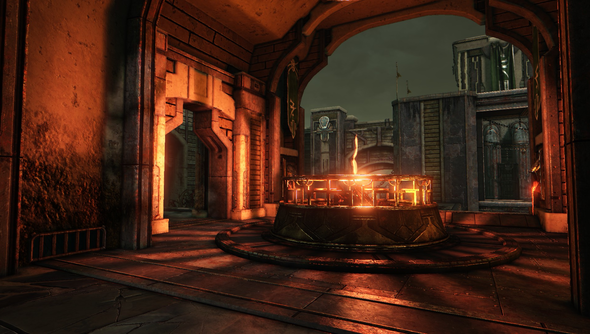 Working in an iron forge is a daunting prospect. All that molten metal, deafening noise, and risk of workplace injury can get anyone down. The team behind Nosgoth have made that a darn sight worse by giving their new forge-based level, The Crucible, a gothic do-over. And, being Nosgoth, the risk isn’t so much of being splashed with molten iron, as it is being pounced on by a thirsty vampire.

As you can see, The Crucible offers precious little by way of aerial cover. Instead most your fighting will take place in the tight streets. This means human players are exposed to attacks from Nosgoth’s flying vampires in particular but also the vampires which can scale the walls and leap down on your from the rooftops.

Essentially, humans, you’re in for a bad time.

The Crucible will also ship with two new skins for the Deceiver class. So if you’re thinking your vampire needs a wardrobe change then you’ll want to check it out.

This is the third major release for Nosgoth since it officially launched last month. Previously the team released a new class for both the human and the vampire side, the Vanguard for the mortals and the Summoner for the creatures of the night.

You can see them at work in the trailers below:

If you’ve not had the chance to check the pulse of Nosgoth, Fraser was a fan, Steve was not. You can try it out for yourself for free on Steam.