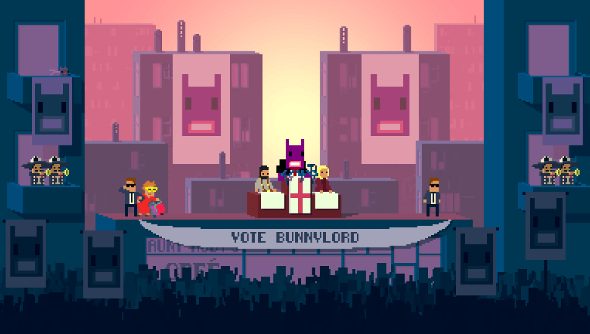 Political satire, a time-travelling rabbit, drug power-ups and buckets of blood – what doesn’t Not a Hero have? A release date? Nope, not anymore. OlliOlli developer Roll7 announced the date today, along with a new trailer that you can watch right now with your squishy orbs of sight.

“The Roll7 team really wanted to embrace the indie developer lifestyle by delaying the release of Not A Hero on several occasions for no discernable reason,” said Roll7 creative director, John Ribbins. “Unfortunately, we also have a publisher so we have to stop messing around and release it. So, May 7 I guess.”

So, in a couple of months, you’ll be able to help mayoral candidate BunnyLord his campaign manager, Steve, a reformed assassin, clean up the streets by covering them in the blood of lots of nasty people.

It’s a 2D pixel art dealio, but uses a peculiar engine which makes it sit somewhere between 2D and 2.5D. The tech’s called ISO-Slant, and the result is 2.25D, which will obviously change the way that we play 2D games forever, but maybe .25 less than 2.5D.

In a surprising, nice – and probably savvy – move, Roll7 and Devolver Digital put Curiosity winner Bryan Henderson in the game, as God, after the fella was essentially ignored and forgotten about by 22Cans.

Before it launches in May, folk will be able to take it for a spin at PAX East, Rezzed and SXSW.