Acer have announced they’re delaying the release of their Predator X27 4K G-Sync HDR monitor. Sad times… but it’s going to be okay people, there will still be both 4K and ultrawide G-Sync HDR screens coming from Asus later this year.

But what’s the best gaming monitor right now? It just so happens that we’ve put together this ‘ere guide on that very subject…

Acer didn’t do any sort of official release detailing the launch, so we’ve only found out about the delay via a tweet from Acer America explaining that the expected release of the HDR gaming display has been put back to launch early next year. Thankfully Acer’s long-time rival, Asus, have confirmed to us they’re still on track for this year.

The Predator X27 is the first HDR gaming monitor to come out of the Acer stable, and is sporting some rather sexeh specifications. As the name might suggest, it’s a 27-inch panel, but it also comes with a 4K native resolution (3840 x 2160), a refresh rate of 144Hz, G-Sync compatibility and that all-important HDR support. Okay, so maybe as of right nowthe HDR support isn’t necessarily all-important, but as more HDR10-compatible games are released this could become the definitive way to play the latest PC titles.

We’ve spoken to both Asus and Nvidia this morning and they’ve assured us that there will still be G-Sync HDR goodness coming this year as Asus are still on track to launch their own, almost-identically specced display this year. 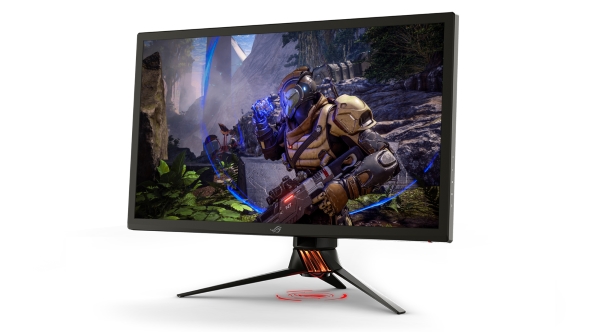 The Asus ROG PG27UQ has the same essential specs as the Predator X27, and also comes with the Quantum Dot nano-filter to maximise the colour gamut of the panel, as well as the individual LED backlighting system with 384 discrete lighting zones. That’s what allows the display to deliver that retina-searing 1,000 nits of peak luminance.

The reason the Acer and Asus screens are so similar is they’re both using the same AU Optronics panel, which makes it all the more strange that Acer are choosing to delay what would become their flagship high-end gaming monitor. They were both announced at the Consumer Electronics Show (CES) in Las Vegas in January and, with Acer America announcing the new Q1 2018 launch for the Predator X27, that puts it into focus for next year’s CES.

We don’t know what that means for Acer’s ultrawide G-Sync HDR screen, which we had a play with at Computex in June, but it’s probably safe to assume that Acer will have put the launch of the Acer Predator X35 back to match.

This could well leave Asus as the only player in the high-end HDR game, however, with few HDR-compatible titles around right now, or on the horizon, and no GPU hardware capable of delivering 4K games at 144fps, that may not play out too badly for Acer.