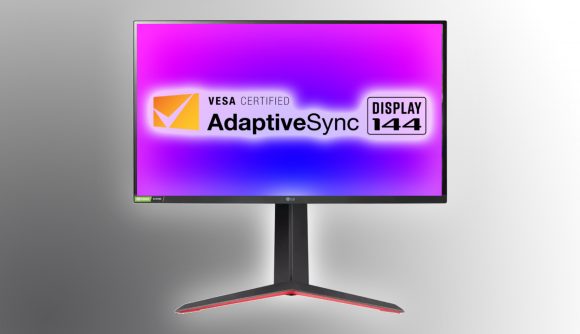 The Video Electronics Standard Association has created a new ‘VESA certified’ adaptive sync standard, and it might replace Nvidia G-Sync and AMD FreeSync branding on gaming monitors. The organisation claims the new certification is the first “open source industry standard” for visual performance and says the logo will help reveal “what’s really inside” variable refresh displays.

The new adaptive sync standard has its own dedicated site that lists specs, certified products, and performance criteria. If you’re nerdy for the best gaming monitors, then there’s plenty to sink your teeth into on the new page, including maximum and minimum refresh rate ranges, flicker refresh rate tests, and frame-to-frame jitter duration metrics.

Of course, VESA’s Adaptive-Sync label aims to make things less convoluted by pairing specific displays to spec expectations. The stricter nature of the new standard means it could replace Nvidia G-Sync and AMD FreeSync branding down the line, especially since the two are now mostly cross-compatible. That said, VESA’s FAQ does state that the program “imposes no restrictions on the use of additional logos and certifications of other programs,” so perhaps we’ll see all three tech labels listed side by side.

VESA splits its Adaptive-Sync Display certification into two tiers – Adaptive-Sync and MediaSync. The organisation says the former is specifically “optimized for gaming”, while the latter caters to video production and playback. Ultimately, the unification of variable refresh tech should make pairing your gaming PC with a gaming monitor even easier, while allowing the best graphics cards to boost fps without being troubled by screen tearing.