Chinese GPU manufacturer, Colorful, has been showing off the only Nvidia GTX 1660 Ti I now want to stick in my PC. At the Computex show in Taipei last week the company showed off a plain black-shrouded beauty of a graphics card. It’s a single-slot GPU in the same mold as the super-sexy looking RTX Quadro 4000 workstation cards, and harkens back to the heady days of one of my favourite gaming GPUs of all time: the Nvidia GeForce 8800GT.

Sure, the new RTX 2080 Ti Kudan is a lovely looking piece of kit too, all steampunk cogs and super widescreen LCD panels, but it’s the slimline simplicity of the Colorful GTX 1660 Ti card that I can’t help but fall in love with. It’s wonderfully understated and unassuming, which does though have me wondering whether it’s really going to be shipping as a gaming GPU rather than as some sort of pseudo bargain workstation GPU.

Still, it’s rocking the exact same standard GTX 1660 Ti specs as the reference-clocked cards, which means it will still deliver decent gaming performance from inside its svelte chassis.

The single-slot Colorful GTX 1660 Ti was found by Hermitage Akihabara while visiting the Colorful booth at Computex last week, and in turn it has found a place in my heart. Though I’m depressingly certain that this diminutive card is going to be a China-exclusive option, however much I beg…

Top chips: These are the best graphics cards on the market today

There are no details about the potential launch of the card, and it seems very much in the suck-it-and-see stage of product prototyping as there’s not even a single sticker on the plain black GPU shroud.

Admittedly the single-slot design is going to limit the amount of overclocking you’re going to be able to do with this GTX 1660 Ti – even with a serious Asus ROG cooler attached to it, the TU116 GPU will top 86°C when pushed.

But at stock speeds the GTX 1660 Ti isn’t a massively hot and heavy GPU, indeed Colorful is claiming a maximum GPU temperature of 89°C with the N1660Ti-606-SI3.

Yeah, not quite as catchy a name as ‘Kudan’ that one. 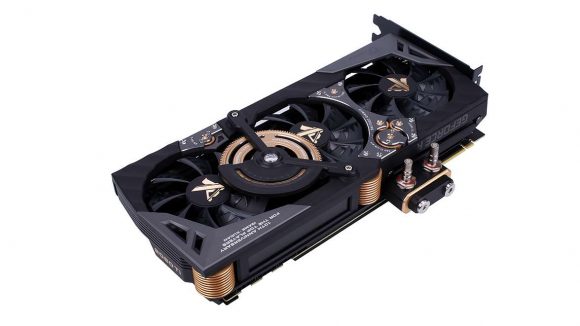 But Colorful has been showing off its limited edition steampunk marvel, the iGame RTX 2080 Ti Kudan, at Computex too, and that one could make it out from mainland China. Unless president 45 sticks his oar in, I guess. Though there are only 1,000 of the cards being made, but they do have a massive GPU overclock, three 8-pin power connectors, and a hybrid air/water-cooling chip chiller attached to them.

So they’re definitely prohibitively expensive too… just get me a slimline GTX 1660 Ti and I’ll be happy.