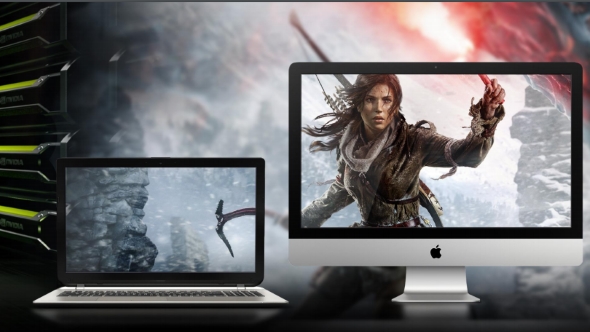 Over the last couple of days both Nvidia and LiquidSky have unveiled two new approaches to the age-old problem of trying to actually make game-streaming a viable service people will actually use. But do their different approaches actually make sense for gamers?

Periodically the hoary old chestnut of PC game streaming rears its blurry, laggy, buffering head and someone tries to make a go of it, convinced they’ve figured out where everyone else has gone wrong. I blame Netflix.

They have, it’s called Steam.

But loads of companies have been trying to use the same Netflix streaming model for games to allow people without access to high-end gaming PCs to still be able to play AAA titles on low-end or mobile devices. Most have largely failed.

OnLive and Gaikai have disappeared – one dead, the other respawned as PS Now. PlayKey have had to completely change their business model and Nvidia’s GeForce Now has been hobbling along on their proprietary Shield mobile platform since 2012.

But Nvidia are convinced they’ve figured out what’s been going wrong with everybody’s streaming model and are relaunching GeForce Now in March as a wider service across low-end PCs, tablets and set-top boxes. The big thing? Steam integration and a credit system. 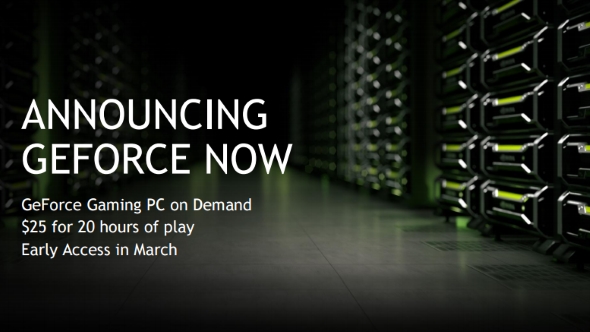 GeForce Now looks to be setting up a lot like Playkey’s redesigned model, allowing you to use your Steam account to hook into the streaming service and access your games on whatever platform you’re using at that point. And they’re also syncing your saves from the cloud and your local machines as well as your games, which in itself is pretty massive.

As is the ticket price. The new plan is that, instead of an eat-as-much-as-you-like subscription model, you will now pay for a certain number of credits and those credits translate into a different amount of game streaming time depending on the quality you’re after. $25 will net you 2,500 credits and gaming on a GTX 1080-powered virtual PC takes four credits (or 4c) per minute and a GTX 1060-powered virtual PC then is two credits per minute. Essentially that equates to gaming at ‘Ultra’ or ‘High’ presets respectively. A 1080 machine then costs $2.40 per hour and 1060-level gaming is then $1.20 per hour, making the initial $25 outlay either a 10 or 20 hour investment.

And that’s just the cost of using the streaming service, you still have to pay for the games individually, rather than simply buying access to a large, pre-existing library, a la Netflix. It’s not just Steam either, GeForce Now plugs into Battle.net, Origin, Uplay and GOG too.

Unlike the Playkey model, which only allows you to stream Steam games the company have already had installed on the servers they rent, Nvidia’s GeForce now requires the user to install the games on their rented virtual machine. That should mean any game on those digital platforms is available to the service and, good guys that they are, Nvidia don’t count the installing time as part of your paid playtime credits.

As a credit system rather than a monthly sub it means you can pay into your GeForce Now ‘wallet’ and only use the service when you need to be away from your main gaming PC. It’s not the sort of service which is really going to replace your local gaming rig, but it might be a good extension to get a bit of gaming on your laptop over the holidays, for example.

LiquidSky’s approach though is a little different. They’ve just announced their new free-to-play model, one that’s more in line with Spotify’s ad-supported service than either the Netflix or Nvidia models. Starting in March this year LiquidSky will make their free service live, giving gamers access to a high-performance virtual machine gratis.

High-performance might be a relative term though. They’re still offering their pay-as-you-go and monthly subs, but are adding higher levels of hardware access, right up to a similar GTX 1080-powered machine the top GeForce Now option offers. So the free-to-play version will definitely be a little lower spec.

Like both GeForce Now and Playkey, LiquidSky is also offering gamers access to their existing game libraries, via Steam, Battle.net, Uplay, Origin and GOG, though at the moment it’s not 100% clear if that will include cloud-based saves which would allow you to carry on the same game you’ve been playing on your local gaming rig. 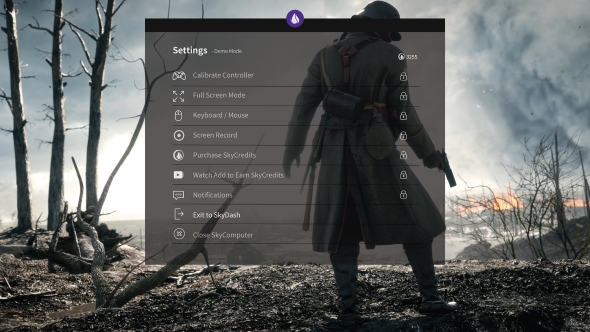 The new approaches by these game streaming wannabes could actually make it a viable service, something that gamers will actually want to use. The proliferation of broadband means there’s a greater chance the necessary low-latency internet connections will be available to more people and the companies are starting to tailor their services to the way PC gamers actually play.

But there are still issues; even though the pricing structure is starting to make more sense they’re still of such niche interest.

These services are unlikely to be an effective replacement for a local gaming machine for many, many years to come – the upload requirements of a network necessary to nail input lag-free gaming are pretty high, and something you’re not going to get on your average hotel, train or airport WiFi. So trying to use the service when you’re out and about will probably be met with limited success.

So are you going to be using such services at home? Not if you’re a serious gamer – you’ll either already have a decent PC or be interested in playing more than 10 hours per month, which means paying out more than the $25 entry fee of GeForce Now. Spending $50 per month on a cloud gaming service when you could get an actual gaming machine on credit for that is a hell of an ask. 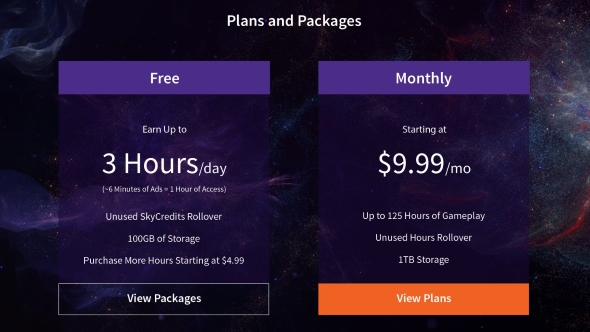 LiquidSky’s ad-supported plan could be far more appealing to casual gamers looking to have a quick bash at the latest AAA games, but it all depends on just how intrusive those ads become. At the moment it looks like LiquidSky’s free model allows you to rack up an hour of play time by watching around six minutes of adverts, up to a maximum of three hours per day. That doesn’t seem like too bad an exchange on the face of it, but it depends how nasty those ads are…

But if anyone can make a go of PC game streaming as a serious service you’d think it would be Nvidia. It’s not a question of taking sides in the red vs green debate, but purely based on the fact that Nvidia’s GRID servers are the ones that form the backbone of all the other services, and Team GeForce will have far easier access to those machines.

Could either Nvidia or LiquidSky convince you to start streaming from the cloud, to give up your rig? I’m guessing probably not…