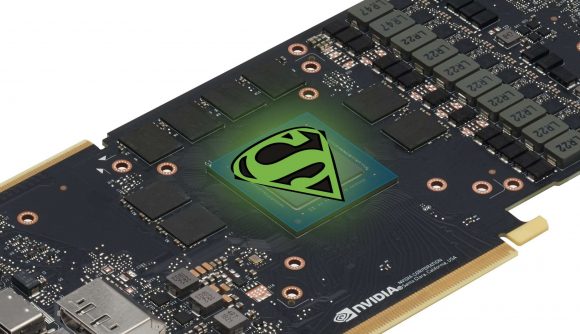 Nvidia may still launch a GeForce RTX 2080 Ti Super this year, but that RTX T10-8 graphics card referenced in the latest AIDA 64 beta release ain’t it. It’s looking like that’s actually a new TU102-based RTX Tesla card being used in Nvidia server-land to power the new ray tracing back end for the RTX-y GeForce Now update announced this week.

It was previously speculated that the reference could only realistically mean one thing – an RTX 2080 Ti Super was on its way to really put the performance boot into AMD’s Navi plans. The TU102 GPU is the big Turing chip, the most powerful GPU of the current Nvidia range, and the most powerful of all the customer-facing graphics silicon out there. Given that the RTX 2080 Ti is the only GPU to not have its own Super edition, a year after its Gamescom 2018 launch, it seemed like a pretty good bet.

But gamers trying to access the RTX-powered GeForce Now service in the US have discovered that the RTX T10-8 is the GPU referenced in the application when you’re running games on an RTX-powered GFN server.

The first noises about the RTX T10-8 came from serial Twitter analyst Komachi who posted the release notes from the AIDA64 6.00.5151 beta last week. Everyone jumped on board with the natural assumption this was an unreleased GeForce card ready to come to market in the coming months.

But a reddit post today points out that folk on the Nvidia GeForce forums have been trying to access the new ray tracing-capable GeForce Now game streaming service in the US and found that the USW2 servers sometimes reported the RTX T10-8 GPUs. That would seem to indicate a Turing-powered Tesla GPU is being utilised for cloud gaming in the two RTX GeForce Now regions Nvidia is launching with first. That’s Northern California and Germany for those who didn’t see the GeForce Now RTX announcement this week. 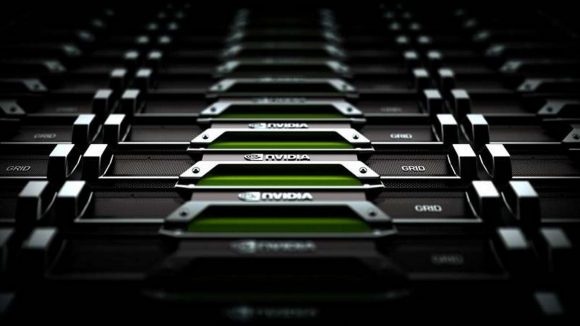 Unfortunately it does seem like Nvidia has taken those RTX T10-8 servers down for the time being as forum members are reporting that they’re only seeing the older Tesla P40 GPUs now. At the moment that’s not such a bad thing as the performance of the RTX T10-8 cards seemed to be far worse than the old Pascal-based Tesla hardware.

One user ran the 3DMark Fire Strike benchmark on the service and found a 52% decrease in overall performance. That’s not going to get you super-smooth ray tracing in your streamed Shadow of the Tomb Raider or Metro Exodus games now, is it?

But given that the GeForce Now service was running on a non-DX12 operating system (Windows Server 2012) you didn’t seem to be able to access any DirectX Raytracing based pretties anyway. Seems like it’s not just the actual GPU hardware that needs updating, someone needs to get down and dirty with an OS upgrade too.

Not a fun job… 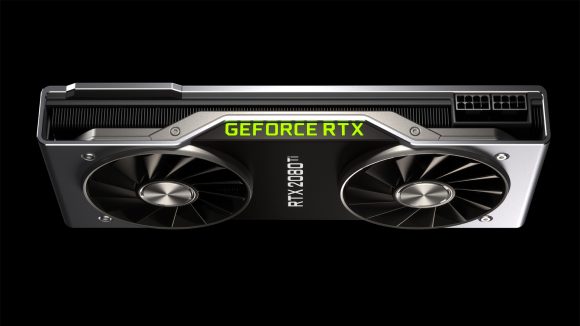 What is the Nvidia RTX 2080 Ti Super release date then?

Well, there’s still no definitive proof that Nvidia is actually going to bother releasing a Super edition of its current top card at all. Before any of the Super cards got released there was an EEC registration which looked awfully like an updated RTX 2080 Ti GPU, but Nvidia has since stated it has no intention of releasing one.

To be fair, it doesn’t need to. The RTX 2080 Ti is still unchallenged at the top of the consumer graphics card tech tree and the rumoured ‘Nvidia Killer’ Radeon card is still just an AMD fan-boy’s wet dream right now.

Though rumours persist of a 4,096 core big Navi GPU on its way. Navi 14 is looking like the low-end, RX 5600 or RX 5500 cards’ GPU, but the Navi 12, which has also been given some Linux driver love this month, could end up being the touted big boy.

Then Nvidia might want to change its mind about releasing an RTX 2080 Ti Super.

Should Nvidia bother with an RTX 2080 Ti Super? Join the conversation on this article’s Facebook and Twitter threads.